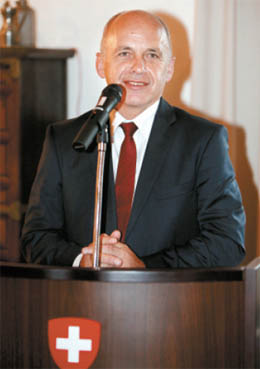 The Swiss defense minister, Ueli Maurer, delivers a speech on diplomatic ties between Korea and Switzerland at a July 12 reception. By Oh Sang-min

The Swiss defense minister, Ueli Maurer, highlighted his country’s special relationship with Korea since the end of the Korean War at a July 12 Seoul reception to celebrate the minister’s visit.

“I would like to stress the deep points of commonality between Korea and Switzerland among many others,” the Swiss defense minister said at the reception. “Switzerland has been a member of the NNSC for 58 years, and Switzerland wants to present its global status as a neutral country.”

Invited by Minister of National Defense Kim Kwan-jin, Ueli Maurer made his Seoul visit from July 11-13 to discuss the current situation on the Korean Peninsula and the role of the Neutral Nations Supervisory Commission (NNSC) in the Joint Security Area.

After having bilateral talks with Kim, the Swiss minister visited a series of historic landmarks in Seoul and Gyeonggi, including the National Cemetery and Panmunjom.

“For the 58 years, the strong relationship [between Korea and Switzerland] has evolved, and I would like to thank you,” the minister added. “We shall continue cooperating [with Korea] anyway, regardless of the NNSC.”

The Military Armistice Commission established the NNSC to monitor tensions on the Korean Peninsula after the Korean War ended in 1953 in a cease-fire.

Four neutral nations - Switzerland, Sweden, Poland and Czechoslovakia - were appointed to supervise the military confrontation between two Koreas, which are still technically at war.

Swiss Ambassador to Korea Thomas Kupfer told guests at the reception, “The visit of the defense minister to Korea is very important, as we have very long relations with Korea for many years, particularly since our NNSC was founded.”

Im Gwan-bin, deputy minister at the National Defense Policy of Korea’s Defense Ministry, said at the reception, “For the past 60 years, Switzerland has been sending members of the NNSC to play an important role for peace on the Korean Peninsula. So Switzerland is a very special friend for the Republic of Korea. I hope the minister’s visit to Korea can create even closer relations between two countries.”