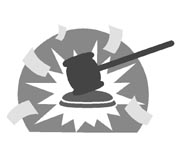 Silicone was widely used in breast implants in the United States in the 1980s, but the material is considered to pose health risks, including cancer. The silicone gel implant may rupture a few years after surgery, affecting the immune system. In the United States, breast augmentation is the third-most common form of plastic surgery after rhinoplasty and liposuction. There are more than 1.5 million breast augmentation surgeries done every year.

Beginning in 1984, people diagnosed with cancer caused by ruptured implants filed class-action lawsuits against Dow Corning, the manufacturer of the silicone implants. After 14 years of courtroom drama, Dow Corning agreed to pay billions of dollars in compensation. In February, 660 Korean patients received a payout of $3.9 million. The trials are considered the model for class-action cases in the United States.

A class action is a lawsuit where the compensation won by the plaintiffs is shared by every victim who suffered the same damage. The United States adopted the system in 1938, and the class action became the “sword of justice” that allows ordinary individuals to come together and stand against large corporations.

Of course, the system also has loopholes and drawbacks. Attorneys who take class-action cases often receive several millions of dollars in fees, but the victims receive only a few hundred dollars each. Sometimes, the victims end up getting coupons instead of monetary compensation in so-called “couple settlements.” Sometimes, corporations win the class action. The largest class action in history was filed against Wal-Mart for alleged gender discrimination against 1.6 million female employees. Ten years after the case was brought to trial, the U.S. Supreme Court ruled in favor of Wal-Mart.

Many people have praised class actions as a historic system. Regardless of the result, class actions remind the public of chronic problems such as gender and ethnic discrimination, spurring social changes and improvements.

In Korea, a class action related to the collection of location information by iPhones is being prepared - more than 10,000 people signed up in a day. The attorney retained for the case has already received 1 million won in legal fees.

This reminds me of the Korean saying, “Never invite a grudge.” Regardless of the development of the class-action suit, the attempt is significant for telling Apple never to invite the grudge of Korean consumers.