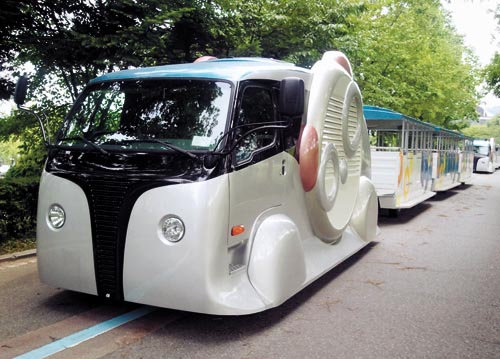 A new “Electric Elephant Train” was unveiled yesterday at Seoul Zoo in Gyeonggi. The Seoul Metropolitan Government and Kaist manufactured the trains using a new technology called Open Leading Electric Vehicle & System, which supplies power via electric wires - which generate a magnetic field - five centimeters underneath the tracks. Seoul Zoo will run three new elephant trains and replace old trains today. The trains run at an average speed of 30 kilometers per hour with a maximum of 97 passengers each. Seoul invested about 490 million won ($461,000) for each. Provided by the Seoul Metropolitan Government