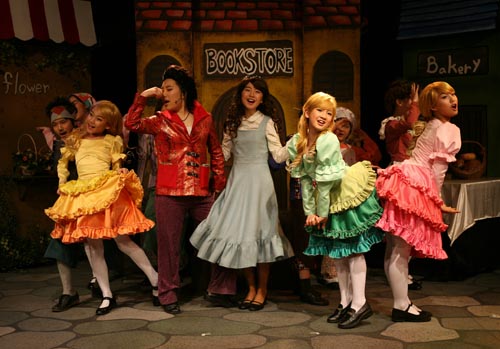 Child actors perform in “Beauty and the Beast,” which runs from Aug. 3 to 7 at Sewoo Art Center in Hyehwa-dong, central Seoul. The musical is presented in English and produced by children’s theater company Theater Seoul. See THEATER, below. Provided by Theater Seoul

The National Theater of Korea, Daloreum

Friday to Saturday: This concert is a part of a cultural partnership initiative launched by the Ministry of Culture, Sports and Tourism. Musicians from Malaysia, Mongolia, Myanmar, Vietnam, Kenya, Thailand, the Philippines and Uzbekistan will perform their traditional music and all 20 of them will play “Habanera” from the opera “Carmen” together as a finale.

Sunday: Presented by Arumdaun Orchestra, this educational concert for young audiences features the music of legendary composer Ludwig van Beethoven. The program features many works that are introduced in school textbooks, including Overture to “Coriolan” in C Minor, Op. 62; Romance for Violin and Orchestra No. 2 in F, Op. 50; and Symphony No. 7 in A, Op. 92.


BEAUTY AND THE BEAST

Aug. 3 to 7: This is an English-language musical for children based on the story “Beauty and the Beast.”

Theater Seoul has produced English-language musicals in collaboration with child and teen actors since 2005. The company won acclaim for its musical “Choonhyang” at the Edinburgh Festival in Scotland, as well as in Singapore, Canada, China and Korea.

To Aug. 20: Based on Herman Melville’s “Moby Dick,” this musical features multitalented performers who act, sing and play instruments to convey the surrealistic and modern elements of the novel.

Saturday to Sept. 11: This show by Tony-award winner Joe DiPietro is a quirky take on the story of creation. It explores the romance between Adam and Eve and attempts to show how paradise can exist only with the presence of love.

Today and Saturday: This festival celebrates gugak (traditional Korean music) with performances by some of Korea’s finest traditional groups, including the Tori Ensemble, which will perform today.

The last day is a jam session between bamboo instrumentalist GongMyoung, percussion group Dulsori and the Tori Ensemble.

July 27: Anaya is a vocal group that mixes traditional Korean music with a variety of other genres, including beat boxing, rap and jazz.

Founded in 2006, Anaya is also known for having produced the original soundtrack for “Old Partner,” the 2009 Korean documentary about the lifelong friendship between a farmer and his loyal ox.

The program includes the love song “Arirang Anaya” and new songs, including “Fly.”

Friday to Saturday: Get cool this summer at the first music festival in the nation to be held at a water park. The program features world renowned musicians and popular Korean singers.

The Friday headliner is American singer-songwriter and rapper T-Pain, who will perform with a full band. Also on the program are 2PM, UV and AstroVoize.

The Saturday headliner is will.i.am from the Black Eyed Peas, who will do a D.J. set. Also performing are Drunken Tiger, T (Yun Mi-rae) Koonta and D.J. Yup.

Sunday to Aug. 13: This festival is held at the Alpensia Resort, a ski resort famous for its location in Pyeongchang, which is aspiring to host the Winter Olympics. The festival is a draw for classical music aficionados, featuring a range of music by world-class artists.

The festival is set in the Jisan Valley and offers a great weekend to mix and mingle with people from all over the peninsula.

Pentaport is also known as a showcase for underground Korean bands, too. No Brain and Vidulgi OoyoO will be there. The festival site, Incheon Dream Park, is a former landfill and is only 20 miles from downtown Seoul.