From the language barrier and austere corporate hierarchy to the country’s hardcore drinking culture and exotic cuisine, living as an expat in Korea can be a challenge. But for the brave few who have chosen to face the challenge head on and start their own businesses here, Korea’s fast-paced economic development and dynamic consumer market offer opportunities they might never have found back home.

The country’s reputation as the Hermit Kingdom seems to be a thing of the distant past, according to recent foreign investment statistics showing, among other things, a rise in the number of expat-owned businesses here.

According to the latest data by the National Tax Service, the number of foreigners who own and operate their own business in Korea has been increasing year by year, totaling 18,681 as of 2008. Compared to the 7,006 foreigners who owned businesses in Korea in 2004, the number has more than doubled. The amount of taxable income from expat business owners per year has also increased, from 36 million won ($34,123) in 2004 to 40.6 million in 2008.

Aside from more expats starting their own businesses, foreign direct investment into Korea is at its highest as well. According to the Ministry of Knowledge Economy, around $13.07 billion in FDI came into the country last year, a 13.8 percent increase from 2009. That’s a dramatic recovery from the early 2000s, when yearly FDI dropped consecutively for three years, falling 26.1 percent in 2001, 19.4 percent in 2002 and 28.9 percent in 2003, on-year.

Despite the steady growth and globalization efforts, Korea is still a tough market to navigate as an expat, especially for those operating a small to midsized venture. Although the country welcomes FDI for chaebol (Korea’s family-controlled conglomerates) with open arms, for many expat owners, the lack of clear, English-language information on immigration and entrepreneurship regulations makes conducting business here difficult.

“Even companies investing in Korea through FDI are generally setting up operations to support the chaebol, so aside from the foreign community and chaebol, there don’t seem to be many foreign companies doing business directly with the majority of Korean consumers.”

The Korea JoongAng Daily met with five foreign entrepreneurs, some with more than 20 years of experience in Korea and others who are just starting out, to hear how they’ve coped with the challenges of being an expat owner in Korea. 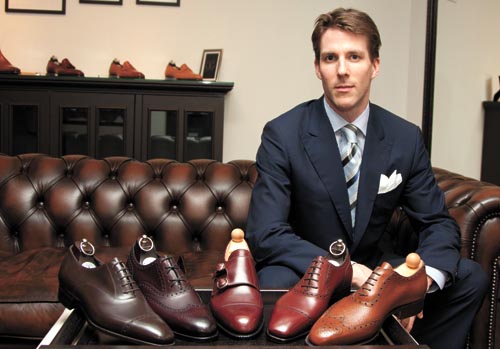 One of the strangest things about Korea for Switzerland native Reto Zimmermann was that people with high salaries here spend lavishly on drinking but are at their stingiest when buying a decent pair of shoes.

“When you look at people high up in Korea who clearly have decent salaries, from consultants to lawyers, it’s quite often a disappointing sight when you look at the shoes and clothes they wear,” said Zimmermann, owner of the high-end men’s shoe store Zimmermann & Kim in Cheongdam-dong, southern Seoul.

“It’s interesting that they spend maybe 1 million [won] [$948,000] a night to go drinking with their buddies, but when it comes to buying good shoes that will last for decades, suddenly they are much more price conscious,” he said.

A former business analyst at Accenture in Switzerland, the 31-year-old Zimmermann formed ties with Korea through his Korean wife, whom he met in Switzerland. Since 2006, the couple shuttled between the two countries before settling down here early last year.

“We noticed there aren’t many good shoes in Korea, shoes that would classically be considered ‘good’ - made by shoemakers as opposed to fashion companies that happen to have shoes in their lineup,” he said.

Seeing the potential for a high-end shoe market here, Zimmermann opened Zimmermann & Kim this February. The store sells handmade men’s shoes from England and Hungary, ranging in price from 950,000 won to 1.85 million won. Upon opening his business, Zimmermann said that although he didn’t have problems with his visa or ownership regulations because he is married to a Korean citizen, the devil was in the details.

“When it comes down to details, planning ahead is impossible here because no one will give you a definitive, reliable answer,” he said. “Also, don’t expect any kind of English documents or a decent Web site in English.”

In running the store, Zimmermann said that many things still surprise him, including his customers. While he initially expected that there would be a demand for these kinds of shoes from corporate executives and lawyers, his customers turned out to be much younger, mainly people in their 20s and 30s who have an interest in classic fashion and are self-employed.

Although the market for expensive, handmade shoes in Korea is currently very limited, Zimmermann said it has “huge potential,” especially as Korea starts to globalize more.

“Even with all its limitations, the Korean market, I feel, has a lot of opportunities because of its well-developed infrastructure,” he said. 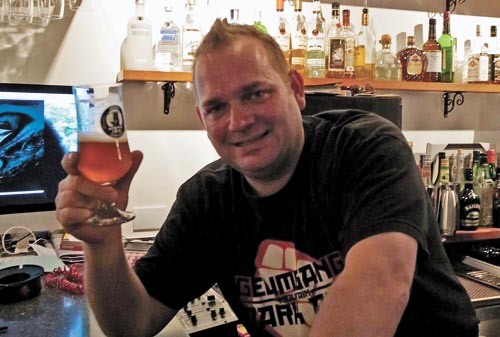 For Canadian Dan Vroon, the process of opening an authentic pub in Itaewon with a group of old friends presented obstacle after obstacle without offering a clear path through Korean laws concerning foreign entrepreneurship.

“Even if you invest in a company, [as an expat in Korea] you are not allowed to work in it without a certain visa,” said the 40-year-old owner of Craftworks Taphouse & Bistro.

In order for a foreign national to operate a business in Korea, he or she needs a permanent resident visa or the equivalent.

Vroon said that although he was “trying to create something that the Korean public will like,” trying to make it happen was discouraging to say the least.

Vroon and six other investors, all foreigners in Korea “paid a lot of fines because of our lack of knowledge.”

“Even though we had local accountants, they didn’t know,” he said. “Nobody knows. But as soon as you screw up, they are on you quickly. It doesn’t seem fair.”

After five months of negotiations and lobbying, Vroon was able to open Craftworks last November. The pub, featuring a variety of its own fresh, microbrewed beer and Western-style dishes, has since become one of the go-to places in Seoul for high-quality beer and a laid-back atmosphere reminiscent of pubs in North America or Europe.

“Generally, the Korean beer market is horrible. It’s just lager,” he said. “Most of the beer sold in Korea has been pasteurized and filtered. It’s dead - the enzymes and yeasts are gone and you’re left with almost an artificial beverage that has to be pumped full of bubbles because it’s stopped activating all the ingredients.”

Despite the multiple hurdles he has faced as an expat entrepreneur, Vroon said the positive reception from his customers and the success of the pub has been a catalyst for making him work harder to grow his business.

“I think there are obstacles everywhere in life. But it’s up to you to overcome them,” he said, adding some advice for future entrepreneurs. “For foreigners who want to start a business in Korea, I would say, make sure it’s viable, don’t take no for an answer and get a good lawyer. If you build something excellent, people will appreciate that.” 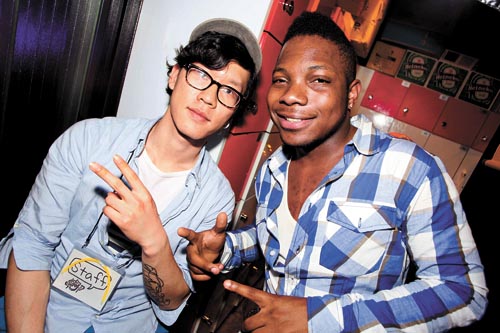 Michael Olatunji, aka Michael da CEO, right, poses with a friend at a party he organized in Seoul. Provided by Watz Up Korea

Michael Olatunji, aka Michael da CEO, always knew he would be his own boss someday.

“When I was a kid, I was known as a bossy kid,” said the 24-year-old founder and CEO of Watz Up Korea, a party planning and entertainment venture.

At 13, Olatunji got his first taste of entrepreneurship when he started lending his PlayStation to kids at his school for around 50 cents per use. Word got out, and kids were soon lining up for the service.

“I made quite a bit of money then!” he laughed.

The Nigeria-born student entrepreneur got the idea for Watz Up Korea out of boredom. Following in the footsteps of his father, who is an engineer, Olatunji enrolled as an undergraduate at the Korea Advanced Institute of Science and Technology in 2008. While living in Daejeon, he said he often found himself with nothing to do during his free time.

“I thought, why is there nothing to do in Korea, the dynamic country?” he said. “What’s up Korea?”

To remedy this, Olatunji in 2009 started Watz Up Korea online as a party and events organizer providing everything for its clients from DJs, venues and catering contacts.

Following the warm reception it got from the public, both Koreans and expats alike, Olatunji started a modeling agency under Watz Up Korea. The agency’s main star at the moment is Jamela Menziner, aka Bunny Jamela, currently a Playboy Bunny at the Playboy Club Macau, in Macau. At present, Watz Up Korea’s Facebook page has more than 4,500 members.

On starting a business in Korea, Olatunji says he hasn’t faced any major obstacles and that so far, the Koreans he has dealt with here have been friendly and supportive, although reserved and shy at first.

“I’ve been surprised at the great reception I’ve gotten from Korea,” he said. “It has its challenges, but doing business here is definitely enjoyable.”

The young entrepreneur has high hopes for Watz Up Korea, and plans to gradually expand the business into a large, entertainment company.

“I want Watz Up Korea to be a medium to connect the foreign and Korean communities here,” he said. 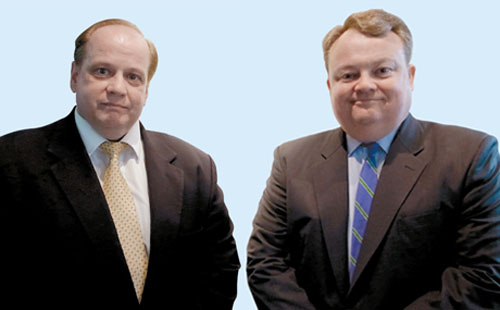 “When I first came to Korea in 1989, I remember most taxis doing hapseung [customers forced to share a taxi],” said Bohn.

“And there were only two choices of beer - Crown and OB!”

Both with a background in public relations and communications, the managing partners started Edge in 2008 with the aim of serving as a bridge for foreign companies and governments to conduct business in Korea. The firm offers PR and communications services for its clients, which are mostly foreign multinational companies such as Michelin and Bank of America, and governments, including New Zealand, Canada and Belgium.

The company is also a strategic partner of Publicis Consultants Worldwide.

For the pair, who watched Korea cope with the Asian financial crisis of 1997 and 1998 as well as the subprime mortgage crisis of 2008, the country has become much more stable and welcoming toward globalization.

“The way I view Korea in my eyes is in two different time frames. There’s the pre-liquidity crisis and the post-liquidity crisis. Pre, I consider Korea to be behind,” said Bohn, adding that the late 1990s was a time for Korea to look back and assess itself.

Thorpe cites the Foreign Investment Promotion Act of 1998 as an important factor that allowed them to open Edge, in that the act allowed foreigners to start companies in Korea without having Korean ownership.

“It allowed foreigners to do a lot more diverse types of work and be in different types of companies,” said Thorpe.

“Before that, a foreigner who was doing business here was usually doing it through his Korean wife or a trusted Korean friend. The fact that we can have ownership in our own names is a huge step for Korea.”

Even though it has grown to accommodate different businesses, both Thorpe and Bohn said that the country still has a way to go to develop its small and midsized businesses - as opposed to its support for large conglomerates.

“In the major, corporate sense, there has been a lot of investment coming in from overseas,” Bohn said. “However, in terms of what Eric and I have done, I think for some, it would be considered a risk.”

Regardless, Thorpe and Bohn agreed that among Asian countries, Korea is one of the most promising markets in which to do business.

“What has always intrigued me about Korea is the fast-paced environment,” Bohn said. “It’s dynamic and it’s always changing. The changes I’ve seen over 20 years are dramatic.

“There is simply more to do, with the country having more to offer, more choices and more opportunities for everyone.”