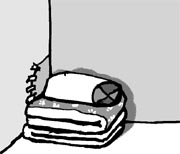 Jjokbang are rooms in a house that have been divided into smaller spaces to accommodate more people. If two people try to sleep in a jjokbang, they have to curl up in order to fit.

Seoul’s jjokbang-town is in Donui-dong. The area had been a firewood market during the Japanese occupation, but after liberation and the Korean War, brothels replaced the market. After a police crackdown in 1968, the red light district was shuttered and day laborers seeking cheap housing moved to the area to look for jjokbang. There are still 3,508 jjokbang units in the Jongno, Yongsan, Yeongdeungpo and Jung districts in Seoul.

Poet Jang Si-a wrote about difficult jjokbang life in her poem, “People in the Magpie’s Nest”: “I only realized how beautiful and wide the night sky was on the day we moved to a house with windows, after the whole family had lived clustered in one tiny room.” A “magpie’s nest” is a name for a hillside shantytown whose houses usually contain jjokbang.

Novelist Shin Kyung-sook’s “A Lone Room” is about a teen factory worker who lives in a jjokbang at the Guro Industrial Complex. The girl lives in a tiny space that doesn’t have an inch of sunshine, but she has grand dreams of traveling the world.

An alternative to the jjokbang is the attic. Attics were used for storage but could also serve as an extra room. Since most attics have windows, it’s a better option than a jjokbang or basement room. In Frances Hodgson Burnett’s 1905 children’s novel, “A Little Princess,” Sara Crewe lives in an attic at a boarding school while working as a maid. Here, the attic window becomes the pathway to making her dreams come true.

These days, the demand for jjokbang and attic rooms is unusually high, largely because of the extreme scarcity of monthly rental offerings in college neighborhoods, following a shift in jjokbang tenants from day laborers to debt-ridden college students. During summer break, for example, there are no vacancies at jjokbang near Korea University.

Writer Lee Ji-seong says in his book, “Attic of Dreams,” that if you have a dream, it will be realized. Universities may charge high tuition, pushing students into jjokbang, but they cannot take away their dreams.

I salute these students. May grand dreams and visions be pursued from jjokbang and attics everywhere for years to come.