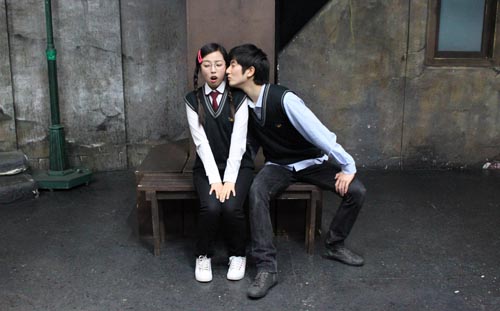 Half-Korean, half-Vietnamese Wandeuk (left) kisses his classmate Yoonha in the Korean play “Wandeuk” at the National Theater of Korea.


The world may be getting smaller, but it’s still a far cry from having various cultures gathered in one place. The National Theater of Korea in Jung District, Seoul, aims to do just that with its second annual Multicultural Festival, quenching the thirst of those looking to experience other cultures from around the globe.

Organized under this year’s theme of “Future Together,” organizers of the festival, which began July 13 and runs until Aug. 2, hope to promote the idea that cultural exchanges are ever more imperative in an increasingly globalized world.

The National Theater also wishes to impress upon visitors that everyone in Korea contributes to Korean culture and, by extension, the global community, according to Lee Jeong-yeon, a public relations officer.

The festival’s goals are even more important today, Lee said, because of Korea’s increasing multiculturalism and diversity, whether by international marriages or immigration.

Lee said this year’s festival will have some new features.

“We tried to get more people to become actively involved in this year’s event,” she said. “Besides performances by overseas groups and a food market with food from various countries, this year we will also have a bazaar so that people can see and buy everyday products from different countries.” 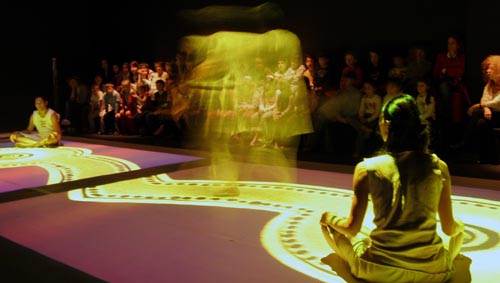 A carpet takes a journey through an imaginary world in “Saltbush” by Australian group Insite Arts. Provided by the National Theater of Korea


The bazaar will sell items like arts and crafts, jewelry, bags and clothing, while the food market will consist of three booths, including one featuring Turkish food.

Unlike festivals that revolve around performances, the Multicultural Festival focuses more on providing a space to converse and interact. Festival organizers hope that visitors to the bazaar and food market will be able to strike up conversation with others.

The international bazaar and food market open next Friday and runs until July 31.

Lee also said that the National Theater wanted the festival to offer Korea’s expatriates a place to meet and talk. Along that vein, the festival will host a singing competition on July 31 for multiethnic and expatriate Koreans. Co-organized with Arirang TV, the competition, called “2011, All Together Top Talent,” will select a winner among the finalists from earlier regional competitions, called Top Talent Singing Contest. The concert will later be aired on Arirang TV.

The Multicultural Festival will also have performances from local as well as overseas groups. “Saltbush,” from the “Children’s Cheering Carpet” series, will be performed by Australia-based Insite Arts from July 29 to 31. The performance features a carpet flying through the air and over the deserts, oceans and rivers of an imaginary world.

A Korean play presents a story of a poor half-Korean, half-Vietnamese student named Wandeuk who is going through puberty. “Wandeuk,” based on the 2008 novel by Kim Ryeo-ryeong, touches on human rights and society’s prejudices. As he struggles with his adolescence, Wandeuk eventually learns how to express his love for his mother and understand others.

*The 2011 Multicultural Festival runs through Aug. 2 at the National Theater of Korea.