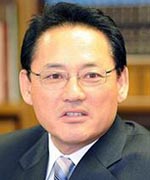 Lee Sang-kil, a senior agriculture ministry official, was tapped as the ministry’s first vice minister, while Yoon Jong-soo of the environment ministry was also promoted to the ministry’s No. 2 post, senior presidential spokesman Kim Du-woo announced.