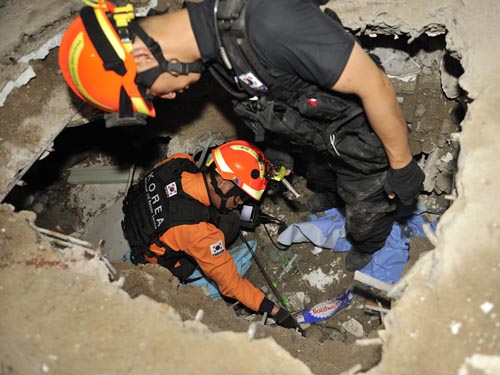 Emergency crews try to find a worker, Kim Seong-tae, 45, with a search dog and endoscope cameras underneath a collapsed building in Cheonho-dong, eastern Seoul, yesterday. Kim was found at 3:30 p.m. His co-worker, Lee Hyung-cheol, 58, died earlier in the morning due to excessive bleeding. [NEWSIS]


Despite a desperate, 16-hour effort to free a construction worker trapped in wreckage after a building collapsed in Seoul on Wednesday, he died an hour after being freed.

According to the Gangdong District Fire Department, the building collapsed at about 3:30 p.m. Wednesday, with the wreckage crashing into the second and first floor.

The worker who died was identified as Lee Hyung-cheol, 58; the one still trapped is Kim Seong-tae, 45.

The rescue team found Lee after searching through the wreckage for about four hours. But after another 12 frantic hours of trying to free Lee - which included emergency surgery to amputate part of his leg so he could be removed - he eventually died from excessive bleeding.

The second victim, Kim, was located face down amid the wreckage by a search dog at about 3:30 p.m. yesterday - 24 hours after the collapse. Rescuers were still trying to extricate him from the scene and it could not be confirmed at press time whether Kim was dead or alive.

A fire department official said an investigation is underway to determine the cause of the collapse amid speculation that the reason was related to the stability of the building or to a technical mishap.

The official said there were 13 workers in the building at the time of the collapse. Lee and Kim, who had been repairing the sewer system on the first floor, were unable to escape.

The rescue team found Lee alive at 7:30 p.m. Wednesday after hearing his voice and managed to give him rehydration fluids through an intravenous line they inserted into his hand, another fire department official said.

Medical personnel determined, however, that Lee would not be able to be freed from the wreckage without amputating part of his leg and emergency surgery was performed yesterday morning.

Rescuers freed Lee from the wreckage at about 6:30 a.m. and he was rushed to Kangdong Sacred Heart Hospital of Hallym University Medical Center in Seoul. However, Lee was pronounced dead one hour later.

The Gangdong District Office told the Korea JoongAng Daily yesterday that the remodeling was not reported to officials because the building’s owner believed the renovations were small-scale in nature and did not require notification.

However, the officials said they found evidence that the workers tried to change some major structures, including columns and ceilings.

If they find evidence of major changes to the building without the proper approval having been gained, officials said, the owner will be punished.