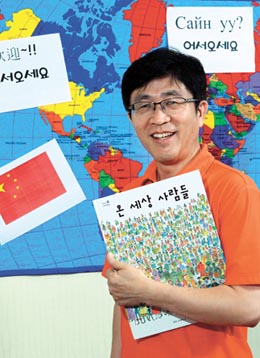 A former Educational Broadcasting System (EBS) geography teacher has founded a school for children of multicultural families who have had troubles succeeding in Korean schools due to a lack of Korean language skills.

In Korea, a “multicultural family” is a legal term that applies to families with one parent of non-Korean descent.

The principal and founder, Lee Hee-yong, 51, was disabled after a back injury in 2008. He said that during his recovery he met a Mongolian-born nurse, and her story of living as a minority was inspiring to him. After being discharged from the hospital, Lee decided to spend the rest of his life improving the educational condition of students from multicultural families.

“I had only taught Korean students whose academic grades are high and have economically privileged parents,” Lee said “And I thought it was time to teach students who are on the other side socially and economically.”

Last November, Lee knocked on the door of the Seoul Metropolitan Office of Education and suggested developing a state-authorized school for multicultural students. After a month, his request was accepted and the Seoul office promised to support his facility with 50 million won ($47,400) per year.

The school, named Daae Multicultural School, which translates into All Love School, opened in March in Nonhyeon-dong, southern Seoul. It is staffed with 18 teachers and eight middle school students from Mongolia, China and the Philippines. The school plans to accept 12 more students to bring it to its maximum capacity of 20 students.

It may look too small, but it’s good enough to teach the eight students fundamental information about Korea, such as experiencing Jeonju’s Hanok Village in North Jeolla. The Hanok Village has 700 Korean traditional houses and is one of the most popular tourist attractions in Korea for foreigners.

The students had lots of trouble in previous Korean schools due their cultural backgrounds. Some were beaten by Korean students and others were bullied because they didn’t speak Korean well and had different cultural customs.

It was a difficult situation for the students’ parents. The students said they didn’t want to go to school.

But in the five months the students have been enrolled at Daae Multicultural School, they have completely changed. The students even requested more classes and are eager to learn Korean intensively.

“We have to help the kids stand on their own two feet when they grow up,” Lee said. “A good level of education is the key.”