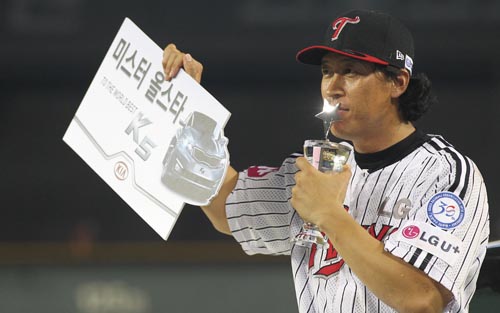 
For LG Twins left fielder Lee Byung-kyu, the KBO All-Star Game MVP Award was always something that seemed just out of reach.

He’s been close in his eight other All-Star Games, but maybe Lee just needed a classic situation to get a little bit of luck.

It was the bottom of the 10th with the score tied 4-4 and lights-out closer Oh Seung-hwan on the mound for the Eastern League. With two outs, Lee, playing in front of hometown fans in Seoul, immediately fell behind 0-2, and in what was his ninth KBO All-Star Game, at age 37, Lee just went for it, hoping for something.

It wasn’t grand, but it was pretty lucky. A bloop single right over the shortstop’s head scored Hanwha’s Lee Dae-soo from third base and earned the Twins’ left fielder his first All-Star MVP Award - and a 5-4 win.

“It wasn’t going to be easy because Oh Seung-hwan was pitching,” Lee told Ilgan Sports after the game. “I thought he would throw fastballs, but I was surprised because he was throwing changeups. After two strikes, I just decided to hit it and it turned out to be a lucky hit.”

But it wasn’t just luck that got him the award.

Lee did have two doubles and an RBI before his 10th-inning heroics at Jamsil Baseball Stadium in Seoul, Saturday, and that played a part in the decision to crown him just the second Twins player ever to earn MVP honors at the All-Star Game.

“I’ve been in so many All-Star Games, but I never felt greedy about the MVP,” Lee said. “But I felt that I wanted to play better today. That’s why I arrived early and practiced. I also had some energy after resting two days.

“I really wanted to show fans I can win the prize.”

The vote might have been closer if not for the way the game ended. Samsung Lions slugger Choi Hyung-woo had two hits, including a two-run home run and it was sure to be a close vote among the journalists in attendance.

But Lee, who has a reputation in the KBO as a hard-working and honest player, received 34 of 42 votes - compared to Choi’s three - and received a bit of vindication. He is, after all, the oldest player ever to win the award.

“I never thought I would be this fortunate playing baseball,” Lee said. “I want to say thank you to my young teammates who set up some good opportunities for me.”

In addition to the honor, Lee, a former Chunichi Dragons player in Japan’s Nippon Professional Baseball league, received a trophy and a K5 sedan from Kia Motors.

“I’m going to drive it,” Lee said when asked what his plans are for his prize.

“I have another car from Volkswagen, which sponsored me, but I’ve never had my own car, so I’m going to use it frequently,” Lee said.

With the All-Star festivities over, and the 30th anniversary of the KBO still in full swing, Lee says he hopes to take back some of the positive moments from the weekend back to his team, which has been in somewhat of a slump.

“I think our team’s slump in the late first half of the season is my fault,” Lee said. “My batting didn’t help during our three-game sweep against Nexen last week. I want to try my best for the team in the second half. My ability will come through better in the second half.”

Lee said he hopes that with such a positive mood after the All-Star Game that much of that will carry over to his team for the remainder of the season.

“We haven’t had very many good moments recently and I just hope our team atmosphere will change through me,” Lee said.

“Since [the Twins] got the All-Star MVP for the first time in a long time, I think we’ll get some good news on the field as well. We have about 50 games left, and I think after playing about 30 games, we can talk about the postseason. For now, I want to focus on those 30 games and put the team in final four,” Lee said.

And maybe with a little luck he can.