Fun in the mud for 2 million Boryeong visitors

Fun in the mud for 2 million Boryeong visitors 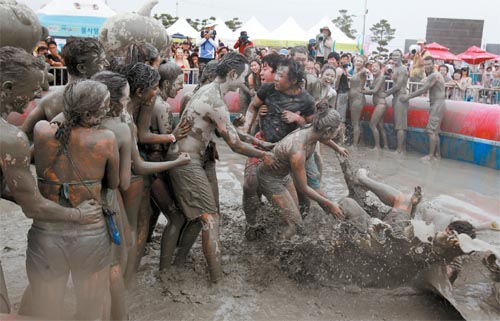 
BORYEONG, South Chungcheong - The Boryeong Mud Festival, which ended yesterday, is now one of the most popular festivals in Korea, having attracted a record number of visitors this year, including loads of mud-crazy foreigners.

This is despite the fact that the central government has reduced its funding and the festival started charging this year for the first time.

The nine-day festival kicked off on July 16 near Daecheon Beach in Boryeong, a quaint costal city 120 miles south of Seoul. Nearly 200 tons of mud was used for a variety of events such as a mud slide and wrestling pits. Rock concerts were held almost every night.

“The most attractive aspect of the festival is meeting new people,” said Christine Joyner, 30, an American who stayed in Boryeong for eight days. “As soon as you get muddy, you can go and meet people: Koreans, foreigners, it doesn’t matter.” 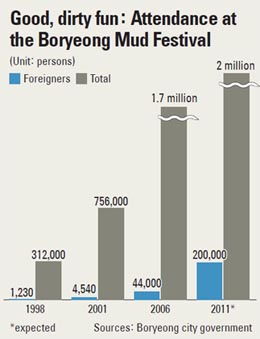 Patrick Deerin, 26, a Florida native, said, “It’s really fun to watch people muddy their faces and bodies. I don’t mind getting dirty, either. I believe the mud has healing qualities too.”

“Until 2010, the festival was free, but starting this year, visitors paid for tickets, 5,000 won for adults,” said Bang Dae-gil, an official with the Boryeong city government’s tourism department. “That’s because the central government cut off its roughly 800 million won in funding for the festival.”

“We were worried that visitors wouldn’t come to the festival because we charged admission,” Bang said. “But when the festival began on July 16, we were relieved to see thousands of visitors.”

It is now one of the largest festivals in Korea with an admission fee, he said, along with the Andong International Mask Dance Festival and the Hwacheon Sancheoneo (trout) Ice Festival.

On Saturday, hundreds of muddy people waited their turn to use the mud amusement facilities. At a mud disco, people covered with grayish goo danced and splashed muddy water on each other.

To wash up, they had the choice of plunging into a swimming pool or using the 3.5 kilometer (2.2 mile) long Daecheon Beach, the longest beach on the Yellow Sea. Showers were also provided.

The mud used for the festival is dug from a field in Cheonbuk, a village 45 kilometers north of the festival site. Workers drill 300 meters of the field and then collect 200 tons of mud from inside. They purify the mud at a factory, dry it to a powder and transport it.

Boryeong believes its mud contains minerals that refresh the skin and calm stress, and in 1996 the city government launched a project to promote the use of the mud in cosmetics. It built a factory, but sales were low.

“So we decided to hold a mud festival to raise public awareness of our mud’s effect and promote mud cosmetics,” Bang said. “In fact, the success of the festival itself wasn’t our initial goal, but look what happened.”

As the festival got more popular, the sale of mud cosmetics has also increased. In 2010, the Boryeong city government sold 31,540 units of mud cosmetics domestically and overseas and earned revenues of 468 million won. The cosmetics have also all been approved by U.S. Food and Drug Administration.

“We expect about 15 million won in sales of mud cosmetics at this year’s festival,” said Lee Seung-geun, 44, a salesperson at a city-run mud cosmetics booth at the festival. “About 60 percent of the customers are foreigners and the most popular item is the mud pack.”

“During the festival, I earn more than 15 percent more in profit than usual,” said Lee Chun-o, 70, owner of a local pension, or guest house. “The festival indeed helps boost the local economy.”

Said Han Sun-ja, 54, owner of another pension: “Most of the rooms in the pension are full during the festival, especially with foreigners. “On the first day of the festival, July 16, roughly 250 foreigners stayed in my pension and three other pensions, and they held a barbecue party in our front yard. Foreigners are usually very nice, with good manners, and they obey the rules.”

Han said charging for the festival didn’t have any impact.

“I feel the festival became larger because of more facilities and better services than in previous years.”

Of course, into every festival a little mud must fall.

“The facilities are good but the number is relatively small, considering that so many people have to line up to use them,” said Im Seon-ju, a 49-year-old woman who came to the festival with friends.

“The insufficient number of shower booths and coin lockers is also a problem,” Im added.

A quarter of the posts written by Koreans on the festival’s official Web site complained of disorder at the festival or threw some mud at the foreign tourists and their rowdy behavior.

“The festival was just like an alcohol party,” a Korean tourist wrote anonymously. “Drunken foreigners were hanging around with their drinks in their hands and fragments of broken beer bottles were everywhere. The scene was embarrassing and dangerous for my kids.”

In response to the complaints, the festival’s director Bang said, “We know that some Korean tourists were unhappy with the foreigners and posted complaints on the Web site.

The Boryeong city government is now planning to expand the festival into a “Mud Expo” in 2012. And when it comes to mud, no aspiration is too high for Boryeong.

“Within 10 years, we will launch a ‘Mud Land,’ building shopping malls and convention centers on a 79,073 square yard plot near the festival,” Bang said. “When Mud Land is built, the mud festival will be held day and night for a longer period than now.”