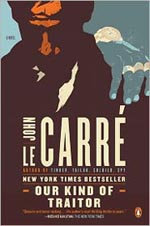 John le Carre shows us once again his acute understanding of the world we live in and where power really lies. In the wake of the collapse of Lehman Brothers and with Britain on the brink of economic ruin, a young English couple become helpless pawns in a game of nations that reveals the unholy alliances between the Russian mafia, the city of London, the government and the competing factions of the British Secret Service.


More Money Than God: Hedge Funds and the Making of a New Elite (Council on Foreign Relations Books (Penguin Press)) 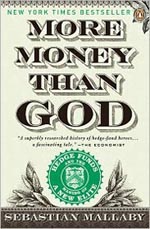 Wealthy, powerful and potentially dangerous, hedge fund moguls have become the It Boys of 21st- century capitalism. Beating the market was long thought to be impossible, but hedge funds cracked its mysteries and made fortunes in the process. Drawing on his unprecedented access to the industry, Mallaby tells the inside story of the hedge funds, from their origins in the 1960s to their role in the financial crisis of 2007 to 2009.

The Shallows: What the Internet Is Doing to Our Brains 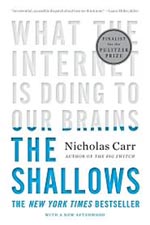 “Is Google making us stupid?” When Nicholas Carr posed that question, in a celebrated Atlantic Monthly cover story, he tapped into a well of anxiety about how the Internet is changing us. He also crystallized one of the most important debates of our time: As we enjoy the Net’s bounties, are we sacrificing our ability to read and think deeply?

Now, Carr expands his argument into the most compelling exploration of the Internet’s intellectual and cultural consequences yet published. As he describes how human thought has been shaped through the centuries by “tools of the mind” - from the alphabet to maps, to the printing press, the clock and the computer - Carr interweaves a fascinating account of recent discoveries in neuroscience. Our brains, the historical and scientific evidence reveals, change in response to our experiences. The technologies we use to find, store and share information can reroute our neural pathways.


168 Hours: You Have More Time Than You Think 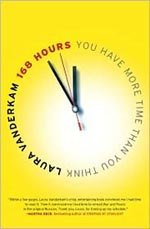 It’s an unquestioned truth of modern life: we are starved for time. With the rise of two-income families, extreme jobs and 24/7 connectivity, life is so frenzied we can barely find time to breathe. We tell ourselves we’d like to read more, get to the gym regularly, try new hobbies and accomplish all kinds of goals. But then we give up because there just aren’t enough hours to do it all. There has to be a better way, and Laura Vanderkam has found one.

After interviewing dozens of successful, happy people, she realized that they allocate their time differently than most of us. Instead of letting the daily grind crowd out the important stuff, they start by making sure there’s time for the important stuff. This inspiring, practical guide will help anyone of any age get the most out life.


The Warlock (The Secrets of the Immortal Nicholas Flamel) 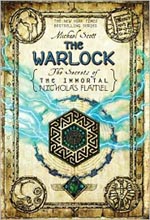 In the fifth installment of this bestselling series, the twins of prophesy have been divided, and the end is finally beginning.

With Scatty, Joan of Arc, Saint Germain, Palamedes and Shakespeare all in Danu Talis, Sophie is on her own with the ever-weakening Nicholas and Perenelle Flamel. She must depend on Niten to help her find an immortal to teach her Earth Magic. The surprise is that she will find her teacher in the most ordinary of places.

-All from the publisher