Get ready for a new global crisis, warns author

Get ready for a new global crisis, warns author 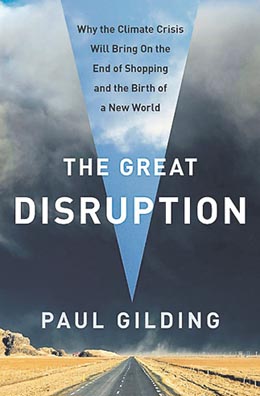 Gilding, author of a new book “The Great Disruption,” has a simple message: We have left it too late to avoid serious impact from climate change and ecological damage after trying to drive global economic growth far beyond system and resource capacity.

As a consequence, we risk an environmental crash, triggering a sudden collapse in the global economy, and need to be ready to respond to the ensuing “social and economic hurricane,” he says.

“If you thought the financial situation in 2008 was a crisis, and if you thought climate change was a cultural, economic and political challenge, then hold on for the ride,” writes Gilding, a former head of Greenpeace International.

“We are about to witness humanity deal with its biggest crisis ever, something that will shake it to the core - the end of economic growth,” added the 52-year-old Australian, who as an activist was arrested five times during protests.

After frustration over how the mainstream environmental movement was struggling to get its message heard, Gilding founded his own consultancy that went on to advise businesses from BHP Billiton to DuPont on sustainability

Scientific study indicates we are reaching the limits of driving up growth, he argues, and spiking oil and food prices seen in 2008, followed by a financial crisis partly driven by a desperate bid to drive growth, were the canaries in the mine.

He cites modeling by a group of scientists - the Global Footprint Network - showing that in 2009 we were already running the global economy at 140 percent of capacity, and plans to run it faster and harder as populations soar will hit a wall.

Collective denial about how climate change and resource pressure will impact us will only lift when we properly feel it in our wallets, he adds.

“We will not respond to climate change or sustainability even when it’s clear we risk wiping out 50 percent of the diversity of life on earth. We will respond when the threat is to our economy and lifestyle.”

Financial markets will see big drops, while the resulting economic and political crises will be massive in scale and last for decades.

“The basic model is broken. If we really got the economy growing again at a significant rate in the West and developing countries again then oil prices would absolutely spike and if oil prices spike and food prices spike that would then undermine economic growth,” said Gilding.

“I think we’ll have another major financial crisis within a few years,” he added, speaking by phone from his home in the island of Tasmania, Australia, after recently returning from an overseas tour to promote his book.

“Greece could have been the trigger, it wasn’t this time, it could be next time,” he added. “Who knows what it will be.”

More recent political events too, including the Arab Spring, can also be clearly linked to a jump in food prices, he says.

“There is very clearly a connection between food prices spiking in Egypt and Tunisia leading to political unrest which was then leveraged by the Arab Spring movement.”

Higher food prices were linked to a failure of Russia’s wheat harvest due to extreme climate, and Gilding argues if it had been in the U.S. Midwest grain belt it could have caused a bigger catastrophe in the wheat market.

He doesn’t rule out spectacular breakthroughs in technology, but believes it is realistically too late to stop a crisis.

So what are we supposed to do? He cites the mobilization of much of the world during World War II and even how strongly world leaders responded to the “comparatively minor hiccup of the global financial crisis.”

The author sees massive industrial and economic shifts to contain climate change, including eliminating net CO2 emissions within 20 years, with a 50 percent cut in the first five years.

Gilding sees the post-crisis world as one where big oil may die but there will be opportunities for innovative companies, though he says we’ll have to ditch our attachment to a growth-focused, consumer-driven global economy.

And despite the painful transition, he thinks the spin-offs will be ultimately positive, with the potential for us to lead a “more resilient lifestyle” including greater income equality and working fewer hours.