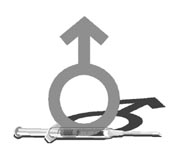 Eunuchs have been found in many societies throughout history. They served the king in ancient Korea and China. In Egypt, Rome and Turkey, prisoners of war were castrated and employed as palace servants. In the 17th and 18th centuries, sultans in the Ottoman Empire kept hundreds of concubines in the court harem, and therefore the sultans wanted the harem staff to be comprised of eunuchs. African eunuchs were preferred, so Egyptian slave traders captured and castrated African boys from countries like Sudan and sold them to the Ottoman Empire.

In medieval Italy, boys were castrated before puberty to be trained as castrati, the male singers whose vocal range is equivalent to a female soprano. Women were not allowed to participate in the choir because of a passage in I Corinthians 14:34, “Let women keep silent in church.” When boys were castrated before puberty, the larynx would not develop as they grew older, allowing them to sing at a beautifully high pitch. The castrati were so popular that more than 6,000 boys were put through the painful procedure every year. Celebrated Italian opera singer Farinelli, whose life was made into a movie, was also a castrato. Composer Joseph Haydn, known as the “father of the symphony,” was a boy soprano but avoided castration because his father opposed it. In China, castration was used as a punishment that was nearly as severe as execution. Famous historian Sima Qian completed the Records of the Grand Historian amid the disgraceful pain of castration.

Since castration was an irreversible process, the removal of the male organs was performed with extreme caution, even when the person had chosen to be castrated. In China, surgeons specializing in the castration of eunuchs were the ones to perform the operation. Before the operation, the surgeon would ask a number of times whether the candidate would not regret the choice. If there was even the slightest hint of hesitation, the procedure would be postponed.

Beginning July 24, chemical castration will be performed on child molesters who are likely to repeat the offense. Some have argued that the forcible injection of the chemical constitutes a violation of human rights. If administered for an extended period of time, there could be side effects, such as feminization of the body. While chemical castration does not completely remove sexual functions like the surgical procedure does, it should be used with special prudence because it is accompanied by the risk of considerable side effects.