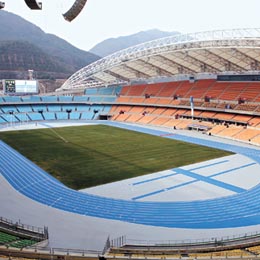 While most tracks that circle the outer edge of stadiums’ fields tend to be reddish-brown in hue, Daegu Stadium’s track, specifically implemented for the World Championships in Athletics, is blue. Some athletes describe it as a “magic carpet,” and there’s a good reason for that.

The track was made by Italian flooring company Mondo and is more elastic, yet more resilient than older tracks. Mondo says the track’s surface prevents slippage and is designed to give runners a consistent bounce, which can help some athletes shave seconds off their times and get closer to world records.

At 13 millimeters (0.5 inches) thick, the new track is comprised of a double layer of vulcanized natural rubber on top of asphalt.

Such technology has been employed before, such as at the 1976 Olympics in Montreal, but the new version of the Mondo track has only been used since the 2008 Olympics in Beijing, where five new world records were set. The surface will also be used in the London Olympics next year.

The track in Daegu has already been tested and was certified Class 1 - the highest designation - by the IAAF in April. In the Colorful Daegu Pre-Championships Meeting in May, 53 of 75 athletes who ran on the surface broke their personal bests.

Daegu Stadium was previously equipped with a urethane track in 2001, but last December the World Championships organizers injected 1.8 billion won ($1.7 million) to resurface the track.

As for the color, the organizers said blue was chosen to help athletes concentrate on the event and lessen the eye strain on spectators and TV viewers.

This is the first time the track is being used in Korea.