Daegu ready for its biggest event ever

Daegu ready for its biggest event ever 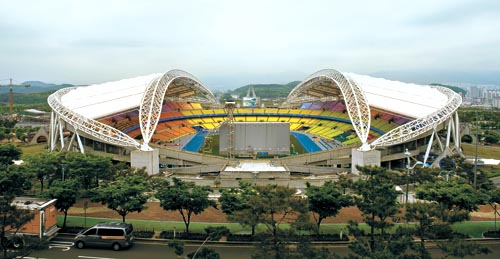 Daegu Stadium All venue photos provided by the organizing committee


With the 2011 World Championships in Athletics about a month away, the Korean host city of Daegu is getting ready to welcome the world’s best athletes.

The biennial event run by the International Association of Athletics Federations (IAAF) will take place in the southeastern Korean city from Aug. 27 to Sept. 4.

Daegu has some experience hosting international events, having previously held the 2003 Summer Universiade, but the World Championships are considered one of the four major world sporting events after the Summer Olympics, Winter Olympics and FIFA World Cup.

This is Korea’s first time hosting the athletic championships, and among Asian countries, Korea is just the second nation to bring the event to its soil - Japan did it twice in 1991 and 2007 in Tokyo and Osaka, respectively.

The Daegu Worlds will host the most athletes in the history of the event.

“This will be a turning point for Daegu’s development,” Cho Hae-nyoung, head of the organizing committee, said to the JoongAng Ilbo last month. “It is the best and biggest event in the city’s history.” 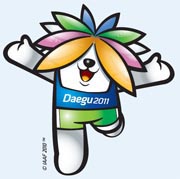 So far, 207 countries out of 212 IAAF members have registered at least 2,472 total athletes to compete, according to the organizers. The previous World Championships in Berlin hosted 1,984 athletes from 201 countries.

But the number of athletes participating in Daegu can still grow because the deadline for final entry is Aug. 15th.

North Korea, East Timor, the Dominican Republic, Norfolk Island and Liechtenstein are the only five nations in the IAAF that haven’t confirmed their participation in the event.

The organizing committee also expects about 2,500 journalists to visit the city and numerous viewers to tune in from around the world.

How Daegu got here 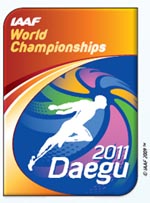 Daegu started its bid campaign in 2005 and was selected as the host city of the 13th World Championships in Athletics at the IAAF Council Meeting in Mombasa, Kenya, on March 27, 2007. The city was chosen over Brisbane, Australia, and Moscow.

Their first order of business was to invite the public to choose the event’s slogan. After opening the contest in December 2007, the organizers announced its official slogan and philosophy in March 2008 - “Sprint Together for Tomorrow” and “Dream, Passion and Challenge,” respectively.

In 2009, the organizers started recruiting volunteers and building the athletes’ village. After unveiling its official event logo in July, the organizing committee sent a delegate to the Worlds in Berlin to learn about event coordination and management and to promote Daegu.

After the Berlin World Championships, Daegu welcomed an on-site inspection by IAAF officials and received a good evaluation on its facilities and preparation efforts.

In April of last year, the organizing committee confirmed the schedule of events, placing popular finals like the men’s 100-meter sprint during prime time for Koreans, despite concerns from Europe and the United States that the time difference would make the events difficult to catch.

Three months later, the organizing committee unveiled its new mascot, “Sarbi,” which is derived from the sapsal, a dog that originated from Daegu and the surrounding area. The mascot is supposed to symbolize good fortune and friendly features.

The organizing committee started selling tickets last year and announced the medal designs in December. It also finished construction on a new track in Daegu Stadium in December of last year, and got certified by the IAAF in April.

The organizers said in a press release a week ago that they are confident their preparations will translate into a successful event, with final preparations currently underway.

The main venue, Daegu Stadium, has replaced its electronic signboards with larger and high-definition screens. The main scoreboard and supporting scoreboard are 1.5 times bigger than previous ones and has better clarity. The screens can also show up to six different video feeds at once.

New lights have been installed around the stadium to enhance the lighting for both athletes and spectators. Sound quality has also been upgraded thanks to new speakers and an audio mixer.

The architectural highlight of Daegu Stadium, while not new, are the Teflon-coated roofs that cover roughly 70 percent of the stadium, which allows natural sunlight to enter while shielding spectators from unwanted elements, like rain.

Other venues and supporting facilities include Athletes’ Village, Media Village, the marathon course, the International Broadcasting Center and the Main Press Center. All are nearly ready to accept guests and athletes.

Ticket sales have been brisk, organizers said. About 390,000 tickets, close to 77 percent of the amount available, have been sold as of last Friday, according to the organizing committee.

That percentage is also better than the previous two World Championships, when Osaka sold only 49 percent of its tickets available in 2007 and Berlin sold 70 percent. According to organizers, about 28,000 tickets were sold overseas.

To help make the event a success, the organizers said they trained 138 referees at six special academies and recruited 6,133 volunteers to serve as interpreters, guides and tournament assistants.

Furthermore, some 17,000 regular citizens from local companies and civic and religious groups will volunteer during the event to help things progress more smoothly and promote Daegu and Korea to international tourists. 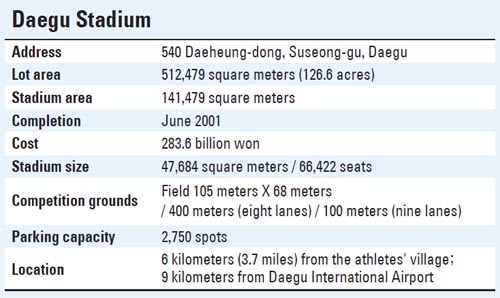 What the event will bring to Korea

The World Championships in Daegu are expected to raise the level of Korean athletics as well as develop a strong national brand by hosting a successful event, said Cho, the head of the organizing committee.

Daegu is on the front line of a series of major international events Korea will host in the next 10 years. Incheon will host the Asian Games in 2014, Gwangju will host the Summer Universiade in 2015 and Pyeongchang, Gangwon, will be the site of the 2018 Winter Olympics.

“Daegu will be Korea’s athletics mecca and will help Korea get rid of its image as an undeveloped country in athletics,” Cho said. “It will also trigger development in athletics all over the Asian continent.”