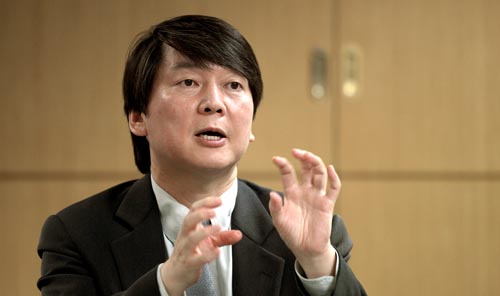 In a forum hosted by the JoongAng Ilbo, Ahn urged the nation’s major companies to encourage young people to challenge and experiment with various business models if they want to be leaders in the IT industry. Ahn, who was appointed dean of Seoul National University’s Graduate School of Convergence Science and Technology last month, warned that if major companies aren’t open to challenges from the country’s youth, they will risk falling further behind in the future.

Ahn spent most of the June 27 forum speaking on the country’s economic infrastructure, including entrepreneurship, business culture and the future of Korea’s young people. A guest speaker at the JoongAng Ilbo’s first annual business forum, Ahn also touched on the global IT startup fever.


Q. Why is Korea falling behind in global IT innovations?

A. There are four reasons. First, many people who start companies do not have enough skills to run their businesses. Second, Korea has a poor economic infrastructure for starting new businesses. Third, there are too many unfair dealings between major companies and small businesses. Fourth, Korea’s startup culture is stuck in a “zombie” economy.

What is a zombie economy?

In Korea, people tend to avoid investing in new ventures, and it makes startup companies borrow from banks to establish their businesses. If the businesses go bad, they don’t shut down but apply for government support. While the startups pay off their debts, their business stops even though the companies haven’t closed down. They use the money partially to pay back their debts and use the rest to remain open, meaning that money circles from government to companies to banks, but not for the sake of the business. It is like a dead company walking.

Major companies like Samsung and LG are contributing to the zombie economy because they are reluctant to acquire startups, even though there are healthy companies making a profit. Rather, they cage small ventures within their companies like a zoo by signing exclusive contracts, which means that small companies are treated as subcontractors, or animals in the zoo. In this system, investors tend to not invest in startups because the small companies have limited growth prospects while they are in the zoo.

How can major companies such as Samsung and LG become first movers?

It is impossible unless the major companies try to change the overall business culture. They should not make “zoo” contracts and instead engage in mergers and acquisitions with ventures.

But hasn’t the business environment for startups improved from 1995, when you founded Ahn Lab?

Before the IMF crisis in 1998, many young and talented brains entered technology-related fields like engineering. But since the crisis, many students have tended to choose easier fields and earn more money because they are not willing to take risks. About 50 years ago, Korea was a “fast follower,” chasing the business trends of the time. But it should not be Korea’s strategy anymore because Korea has grown up enough to innovate.

What are the ingredients for a successful startup?

There are three things: good talent, competitive goods and business execution. In addition, when a company wants to increase its success, early founding members need to make decisions unanimously, and the ideal size for that is about two to four people.

What was the most difficult moment in starting your own business?

In the early period, I could not provide enough money to pay employees’ wages, so I begged banks to issue promissory notes. I still feel anxious at the beginning of every month for no reason because of the experience.

What type of people do you prefer to hire?

It is people who can say “I may be wrong,” because this type of person can cooperate and communicate with many people from diverse groups. I believe that admitting that you’re wrong requires bravery and confidence. If someone has that idea in mind, it could lower business failures by more than 90 percent.

What do you think about education in Korea’s colleges?

Colleges in Korea should feel more responsibility in their roles as educational institutes. In college, students should be able to develop various theories, new business models and experiment with diverse hypotheses. But colleges are not operating as education institutions but like private hagwon.

Just as a hagwon only focuses on achieving good scores on the College Scholastic Ability Test, colleges only focus on student achievements such as prizes, which major companies students joined and the number of students who are employed after graduation.

We know that you get many offers from political parties, and you said we need to change several things in our society, including government policies. But it seems like you are hesitating to participate on a broader stage. Could you explain why?

I’m not a politician type of person, and I don’t have any greed for political power. Exercising political power is a burden for me, not a pleasure. I saw many good people in academia participate in politics with visionary plans that could change our society for the better, but they left without any successful outcomes.