At Vogue Korea’s exhibit, spectacles of fashion and fine art

At Vogue Korea’s exhibit, spectacles of fashion and fine art 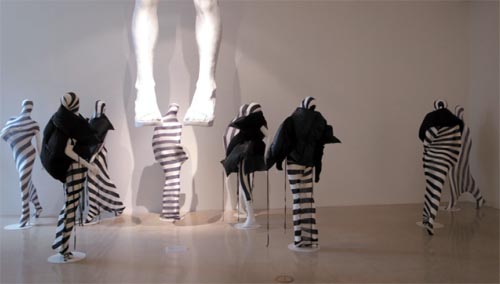 “Sunken in the Mirror” is a collaboration between sculptor Chun Sung-myung and fashion designer Park Choonmoo.


The convergence of fashion and fine art is nothing new, but Vogue Korea’s “Fashion into Art,” a collaborative exhibition between fashion designers and fine artists, has something special in terms of the scale and the weight of the participating artists.

Commemorating the magazine’s 15th anniversary, the exhibition at Plateau, a gallery operated by Leeum, Samsung Museum of Art, in central Seoul, runs through Aug. 13 and features 15 artists and 14 designers - all of them Korean heavyweights.

Most of the fine artists are young with international recognition, such as Ji Yong-ho, who is known for powerful tire sculptures, and Hong Kyoung-tack, who has made a name for himself with dizzying paintings in flamboyant colors. 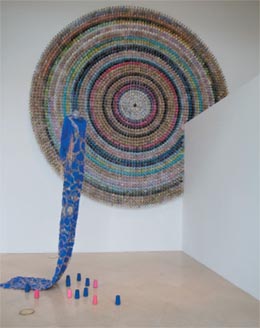 “Cocoon2” is a collaboration between painter and installation artist Hong Kyoung-tack and fashion designer Rubina. Photo by Moon So-young

The exhibition begins with a runway in the form of motorcycle circuit. Along the circuit, models show off a new kind of clothes. Half riding suits, half formal suits, the clothes are a combination of motorcycle protective gear made by sculptor Gwon O-sang and suits by fashion designer Han Sang-hyuk.

“Both artists have an interest in motorcycle riding so we have paired them,” Young-hee Sue, stylist for Vogue Korea, explained.

Gwon O-sang is well known for his sculptures of people covered with photos of themselves and is now focusing on sectional sculptures of motorcycles in a series called “Torso.”

Displayed above the runway is a mannequin in a black dress by veteran designer Jin. The mannequin stands on a black pedestal in the shape of the roots of a giant aged tree, a sculpture made by Ji. The texture of Jin’s polyurethane-coated wool dress is surprisingly similar to that of Ji’s used-tire sculptures.

“After seeing Ji’s sculptures in his ‘Mutant’ series, Jin said she made clothes of very similar texture about 10 years ago,” Sue said. “So, she brought the dress and then Ji made a pedestal in the form of tree roots for it, on the thought that the veteran designer is the root of the Korean fashion world.”

In another room of the gallery is “Sunken in the Mirror,” a collaboration between sculptor Chun Sung-myung and fashion designer Park Choonmoo. Sculptures of two giant legs by Chun are hung from the ceiling, while mannequins in Park’s dresses gaze at the legs. Park designed the striped clothes worn by the mannequins after Chun’s signature-style sculptures - gloomy-looking boys in striped shirts with the artist’s own face.

In the gallery’s black box is a collaboration between artist Lee Yong-baek, who represents the Korean Pavilion at the ongoing 54th Venice Biennale, and fashion designer Haneza. A screen in the dark shows a space full of flowers. The flowers display strange movement, which, upon closer inspection, are made by soldiers camouflaged in floral-print military uniforms amid real flowers. Titled “Angel Soldier,” the piece is by Lee. 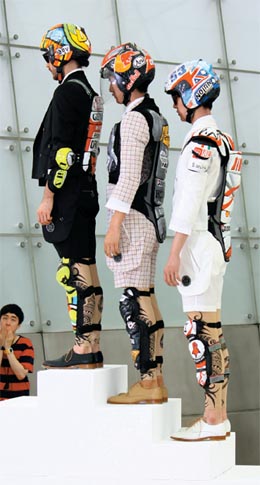 Below the screen is a small pool with a wedding dress by Haneza submerged in it. The soaked white dress brings to mind Pre-Raphaelite artist John Everett Millais’ famous painting depicting Ophelia in Shakespeare’s “Hamlet” drowned in a stream surrounded by flowers.

The collaborative works of painter Hong Kyoung-tack and veteran fashion designer Rubina make the most spectacular part of the exhibition. Rubina made a knit dress of flamboyant colors with colored pencils attached, inspired by Hong’s “Pen” series. And Hong created “Cocoon 2,” an installation work with thousands of colorful spools, whose threads are linked to a dress by Rubina.

“They are one of the designer-fine artist pairs who exchanged thoughts the most actively and for the longest time,” Sue explained.

In front of the works are translucent blue-tone jars and vases made of soap by sculptor Shin Mee-kyoung. The artist, who has studios in Korea and Britain, has used soap to make elaborate replicas of ancient sculptures or antique ceramics.

Fashion designer Moon Young-hee, inspired by the art, in turn created a dress in the form of translucent soap bubbles.