DJ Doc returns with a musical about their life

DJ Doc returns with a musical about their life 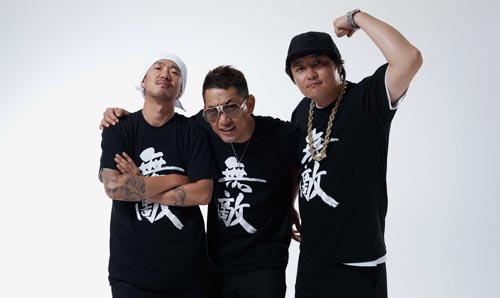 
Once called the “social brats” of music for controversial songs with a cocky attitude, the hip-hop trio DJ Doc is still raising a ruckus. This time, however, it is in the world of musical theater that the group is making its mark.

The new musical, “Street Life,” is based on the band’s struggle to make it big and features 22 of the band’s hit songs - including “Run To You,” “Street Life,” “Dance with DJ Doc” and “I’m a Guy Like This” - rearranged by band leader Lee Ha-neul.

The plot follows three young men who pursue their dream of becoming musicians, despite meeting an evil manager and falling prey to scandals.

After struggling in the music industry, the three men finally get a chance to work with a major entertainment agency. But when they realize that the agency is exploiting them and taking their profits, they leave the agency only to be deluged in scandals and rumors that eventually push them out of the entertainment business. Back at the small club that gave them their first break, they start to rebuild their careers, but this time, do things their own way.

DJ Doc rose to the top in the 1990s with catchy songs that pointed out social injustice. Later, as they became known for sensational lyrics that used profanity, depictions of violence and sexual innuendo, they were banned from national broadcaster KBS in 2000 for the song “L.I.E.” (2000), which expressed their anger and disappointment toward the music industry in Korea. Earlier this month, the group saw itself banned again for the song “Joy and Pain” from the drama “Crime Squad,” which aired in March. The song, cited for its expressions of violence, was included on a list of songs banned by the Ministry of Gender Equality and Family for content that is harmful to young people.

The musical, however, shows a different side of the group and could even serve to rehabilitate their image.

Two members of the group - Lee Ha-neul and Jung Jae-yong - whose name is an acronym for “Dream of Children,” met with reporters last month at a press conference to talk about the new musical. The following are excerpts from the conference. 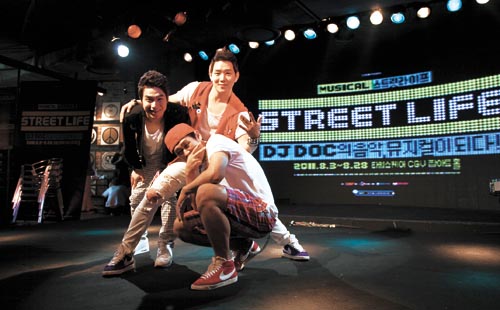 Q. What made you decide to transform your songs into a musical?

A. Lee: We had some hard times back in the day. We had our songs censored by radio and TV stations, so we had limited time and space to show who we are. We thought the only way to truly communicate with our audience was through a musical.

What’s the difference between making an album and making a musical?

Jung: It’s much easier to make an album than a musical. First of all, the performing time is quite different. When you produce a song, you only dedicate three minutes to produce some dance moves for a video or concert. But in a musical you are dealing with two hours or more.

Although the songs in the musical are all by DJ Doc, no one from the group is in the show. You’ve handed over all the acting jobs to professionals. Didn’t you want to do it at all?

Lee: We thought about it, since most of our songs are about our lives. We wanted to do it ourselves, but didn’t think we could act well enough for audiences who pay a lot of money to see high-quality performances. So we decided not to. If we had given up on that idea much earlier, we might have done this musical a lot earlier.

Ultimately, musical theater actors have to have enough strength to perform for at least two hours straight, but we don’t have that kind of stamina anymore. We could probably do two songs, tops. In musicals, each actor has to be fully committed throughout the show. But we aren’t able to do that. On top of that, you’ve got to sing and dance simultaneously. That’s something we can’t do. I really do have respect for the actors in this performance.

Do you think this musical will hit the jackpot?

Jung: Well, I think we need to see the full musical first. Then we’ll be able to tell you if it can. (Laughs.) And second, whenever we say that something’s going to go well, it turns out not to be successful.

Lee: We’re jinxed. There have been many things we were sure would go well, but ended up not working out. For now, we’ll just keep saying that it’s not going to work well.

Which of your songs are your favorites?

Lee: Now, I like “I’m a Guy Like This” (from their seventh album “Appreciation,” released July 2010 after a six-year hiatus) the best. It’s a fun song, not too serious, not too light. I like other songs, too, but I sometimes get tired of singing them and I don’t know if anyone will remember them because they came out so long ago.

How do you feel about the songs in the musical?

Jung: I dare say that you’ll hear a lot of songs that you’ll be familiar with. Instead of just watching the performance, just hum or sing along, give us some cheers and have fun! I hope the songs in this musical bring happiness and laughter to people and help them get away from their routine lives. Thanks to all of you, we are able to eat and sleep. We love you. (Laughs.)

Back in the day, and sometimes even now, DJ Doc were called “social brats.” How do you feel about that, now that you’re all in your 40s?

Jung: If possible, I want us to be called that even now, or if we’re too old to be brats, then how about villains? Is that too much?

Lee: I actually haven’t thought about it. Of course, it doesn’t really fit DJ Doc anymore because our average age is 39.4.

DJ Doc became known for pointing out social injustices. Do you still feel as much anger towards society as you did almost a decade ago?

Lee: Back then, we were in a hurry to show what we liked and what we didn’t, or maybe we were much more straightforward and candid. Now, however, we are maybe more immune to social injustice. Or, and it’s a little sad to say this, maybe we’ve compromised with the social norm.

How close is the plot of the musical to your personal experiences?

Jung: As long as it contains a love story, a boy-meets-girl story, it syncs 100 percent with our own experiences since we’ve all been in relationships.

Lee: It’s less powerful than we expected. We were a lot more hardcore than the plot of the musical shows. I guess there is some censorship in musicals as well. Jae-yong just said that the plot is almost 100 percent synced with ours, but frankly speaking, it isn’t, since it doesn’t include stories about Jae-yong’s ex-girlfriends taking his home and car. I guess you could say it lacks some sense of reality. (Laughs.)

Lee: After our contracts have expired, we’ll go to Chang-ryeol’s company and help him out. As long as it doesn’t go out of business before then.

Lee: I want to do a program for the fishing channel with Jae-yong.

Lee: It’s hard for us to make time to see each other since both of us are busy trying to make a living. We both love fishing, so doing a show on the fishing channel would be fun and let us make money at the same time, like the old days.

Jung: That might make some people think that we only think of ourselves when choosing what to do next. That’s partly true [about the fishing show] since we could kill two birds with one stone. But more than that, it’s because we are now smart enough to know what we can and can’t do well.