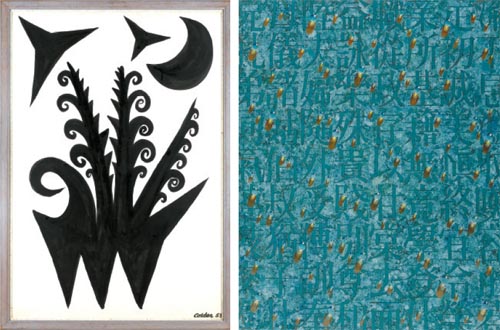 Left: Alexandre Calder’s “Untitled” gouache painting (1953) is part of “Black and White.”
Right: Kim Tschang-yeul’s acrylic and oil painting “Recurrence SH07010” (2007) is part of “Beyond the Blue.” Provided by the galleries


Two galleries on two major art streets in Seoul are holding exhibitions dedicated to certain colors. One is “Black and White” at Opera Gallery in Cheongdam-dong, Gangnam District, and the other is “Beyond the Blue” at Gallery Hyundai on the art street east of Gyeongbok Palace.

Some might imagine “Black and White” to have mainly drawings. And while the exhibition certainly has some, such as Marc Chagall’s “Les amoureux,” drawings represent just a small portion of the show.

It includes an oil painting by 92-year-old French artist Pierre Soulages who is well known as “the painter of black.” He fills his paintings in “ultrablack” and then scratches the surfaces, reflecting light off the black surface. He has been influenced by East Asian philosophy on emptiness and the region’s calligraphy, the gallery explained. The exhibition also shows black-and-white paintings and prints by well-known artists like Alexandre Calder, who invented mobile sculpture.

“For long, Koreans have considered blue to be the color of nature and to be the fundamental color from which all things originate,” Gallery Hyundai said in a release. “The paintings in the exhibition carry this sentiment of Koreans.”

*“Black and White” runs until Aug. 14. Admission is free. Hours are 10 a.m. to 7 p.m. Mondays through Saturdays. Opera Gallery is located on the first floor of the Nature Poem building near Cheongdam Intersection. Go to Cheongdam Station, line No. 7, exit 9, and walk for 10 minutes. Call (02) 3446-0070 or visit www.operagallery.com.