Making sure we’re not xenophobic

Making sure we’re not xenophobic 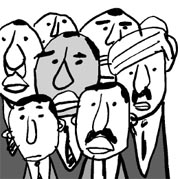 A line connects what are separated. A lifeline continues life, and a phone line carries messages of love. By nature, a line connects. However, a line can also mean separation. If you draw a line, you separate yourself from the others. So when you draw a line, or cross a line, the line is a crack. When a line meets another, the contact is secretive and mysterious.

The Jews are the most notable people who draw a line from other ethnic groups. They were so exclusive about their religion and ethnic heritage that they called non-Israelites “gentiles.” Marriage with a gentile was a taboo among Jews. It may be the origin of xenophobia, hatred or fear of foreigners. It comes from the Greek words xenos, meaning stranger, and phobos, meaning fear.

Koreans also had similar sentiment. The ancient Dongye chiefdom had an extreme aversion to foreigners. When members of a different tribe crossed the border, they had to pay a fine in the form of slaves or horses. But they allowed marriages with other tribes. They may have chosen to cross the line for the prosperity of the tribe. The tradition is similar to the reality in Korea, where people don’t welcome foreigners, though the number of multiethnic families is growing.

The recent terror attacks in Norway have shocked the world. It may be the dark side of the great migration of labor. Last year, racist skinheads in Russia attacked a concert hall, killing or injuring more than 10 people. France is built on the belief of “tolerance,” but it has recently turned to a hard-line immigrant policy. Neo-Nazis in Germany are emerging based on antagonism toward Turkish immigrants. They think immigrant workers are taking their jobs.

Li Si, chancellor of the Qin Dynasty, was once alienated by court officials before being welcomed. The officials urged the emperor to expel all foreigners. Originally from the Chu state, Li Si said, “River and ocean do not discriminate creeks.” The Yellow River and the ocean could become so wide and deep because they accepted even the smallest streams, and the king would be virtuous when he embraced all people. In a modern interpretation, a nation can become great and powerful when it does not alienate or exclude foreigners.

There are 1.26 million foreign residents in Korea. If you treat them as aliens, they will consider you a stranger as well. If we all become foreigners to one another, we would be lonely beings in a desert. We need to check ourselves to ensure there’s not a trace of xenophobia.