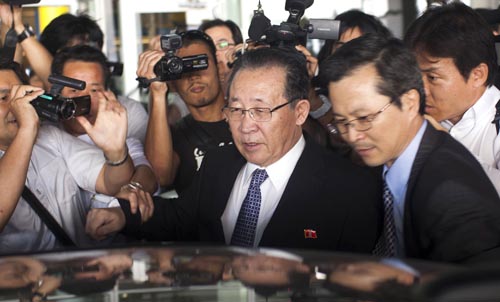 Kim Kye-gwan, first vice foreign minister of North Korea, is swarmed by members of the media after arriving at Kennedy International Airport in New York on Tuesday. [AP/YONHAP]

“I believe North Korea-U.S. relations will improve as now is the time for all countries to reconcile,” Kim told a group of waiting reporters as he arrived at 3 p.m. Tuesday at Kennedy International Airport. Kim said he also had bright prospects for the six-party talks.

Kim’s visit, following rare inter-Korean contact on denuclearization at the Asean Regional Forum last week, has raised hope that the six-party talks on the North’s denuclearization, virtually the only international negotiation framework available to draw the North’s nuclear disarmament, could be resumed soon.

Suspended with the North’s withdrawal in April 2009, the six-party talks involve the two Koreas, the U.S., Japan, China and Russia. The North walked out of the talks citing international pressure on its missile tests.

Ri Gun, the director general of the North American affairs bureau of North Korea’s Foreign Ministry, or Choe Son-hui, deputy chief of the bureau, was speculated to have accompanied Kim during the visit to the U.S. but neither was confirmed to have arrived at the airport.

Asked about the possible outcome of the meetings with U.S. officials, Kim declined to answer, saying that he would talk about it later.

The North, seeking external aid to resolve its food crisis and help prepare for the 100th anniversary of the birth of its founder Kim Il Sung next year, has signaled a return to the six-party talks since early this year.

Pyongyang also made a fresh call yesterday for a peace treaty with the U.S., saying it is essential to resume the six-party talks. The North’s official Korean Central News Agency claimed Wednesday that a peace treaty would help talk Pyongyang into abandoning its nuclear ambition.

Yesterday marked the 58th anniversary of the armistice agreement that ended the 1950-53 Korean War with a cease-fire. The two Koreas are technically still at war.

The U.S. State Department is cautioning against optimism about Kim’s visit, defining the talks with Kim as “exploratory” and “preliminary” to see the North’s sincerity.

Some observers speculate the food crisis in the North is worsening given the North’s sudden change in stance toward the South.

For weeks after North Korean leader Kim Jong-il’s visit to China in May, the North dropped the conciliatory gestures it had made earlier this year toward the South and then threatened not to talk with the hard-line Lee Myung-bak administration.