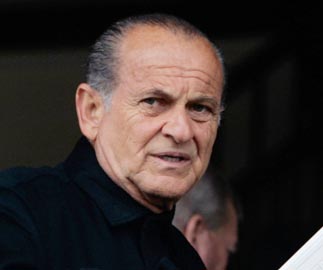 Actor Joe Pesci is suing Fiore Films for allegedly giving him a different role and pay cut after he signed up to star in a Gotti family biopic. [AP/YONHAP]

LOS ANGELES - Joe Pesci claims the makers of a biopic on the Gotti family have made him an offer he can refuse - a lesser part in the movie and a $2 million salary cut.

The actor sued Fiore Films on Wednesday, seeking the $3 million he said he was promised to play the role of a childhood friend and enforcer of crime boss John Gotti Sr.

Pesci claims the company used his name and likeness to promote the movie and attract investors, but now doesn’t want to honor its original offer to him. He has been offered a lesser role for a $1 million payday, the lawsuit stated.

Fiore CEO Marc Fiore rejected the claims, saying he received correspondence months ago from the actor’s representatives telling him Pesci was pulling out of the project until the original director, who left the project, was replaced. “Before we had a deal, Mr. Pesci walked away,’’ Fiore said.

Pesci cited his roles in mobster films such as “Casino’’ and his Oscar-winning role in “Goodfellas,’’ and his lawsuit said he was fully committed to playing Ruggiero in “Gotti: In the Shadow of My Father.’’

Pesci had been named as a prominent cast member in the film alongside John Travolta, who is scheduled to play Gotti Sr., along with Al Pacino and Kelly Preston. The actor’s role was announced at an April press conference. His lawsuit said that helped lend the film credibility, garnered it publicity and helped attract investors and other actors.

Shortly after the announcement, director Nick Cassavetes withdrew from the film.

Fiore said Pesci’s representatives then told him that the actor didn’t want to discuss anything with filmmakers until a new director was chosen. He said that he had tried to work out a deal with Pesci’s New York attorney and that he and new director Barry Levinson had reached out to the actor recently, but the efforts were rebuffed.

Tesser said Fiore was welcome to contact him to try to resolve the matter, but it was clear that there was an agreement for Pesci to star in the Gotti film.

Pesci’s lawsuit claimed that a written contract was never signed, but that Fiore’s actions in announcing his name at the press conference and in other promotional materials made it clear that an agreement had been reached. The agreement called for Pesci to be paid $3 million provided he was willing and able to act in the film.

“Defendant has no intention of paying [Pesci] $3 million or having him portray Ruggiero in the film,’’ the lawsuit claims. “Rather, plaintiff secretly planned to use [Pesci’s] name and likeness to promote the film and then to later concoct some pretext for terminating the contract so as to avoid paying plaintiff anything for the substantial publicity and ‘buzz’ that was generated.’’

Fiore said agreements had been reached with most of the other high-profile actors, including Travolta, Pacino and Preston. Shooting on the film was scheduled to begin on Jan. 3. He predicted a tough fight for the Pesci case, saying he may countersue the actor. “He’s wasting his time and everybody else’s time,’’ Fiore said.