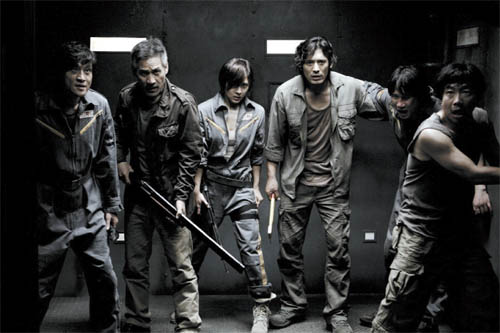 Both produced by Yoon Je-kyun, two Korean blockbusters “Quick” (below) and “Sector 7” (above) will duke it out this summer at local theaters to see which film can attract more audiences. Provided by CJ Entertainment


“Quick” and “Sector 7” may have many things in common, including the same budget of 10 billion won ($9.1 million) - nearly five times the average - and plots that touch upon issues rarely broached in Korean cinema, but they also share the same producer.

Yoon Je-kyun, the man behind both of the summer blockbusters, is the famed producer and director most well known for his 2009 hit “Haeundae.”

And despite their many shared characteristics, the two films are likely to duke it out this summer to attract more audiences.

“Quick” is an action-packed film about a motorcycle courier who becomes entangled in a plot to deliver bombs and “Sector 7” depicts the crew of an oil drillship that battles a sea monster that has been transformed by a virus.

Released last week, “Quick” was third at the box office as of Wednesday, lifted by its balanced mix of humor, heart-pounding explosions and motorcycle chases. 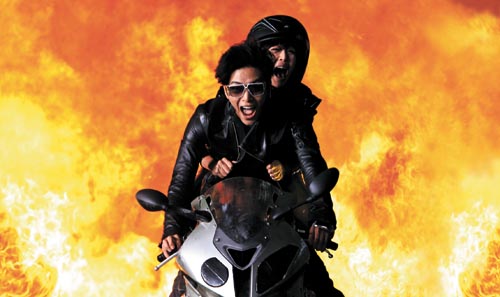 
Despite its rave reviews, “Quick” was initially not a welcomed project by producers, filmmakers or other relevant film industry experts, including special effects and martial arts directors. Most of them believed that it would be impossible to make such a large-scale action film in Korea.

“The film was turned down by Oh Se-young [martial arts director] and Hong Jang-pyo [special effects director] at first,” said Park So-yeon, who promotes the film.

“We kept looking for people who could work with us and Oh and Hong eventually accepted our offer,” Park added.

To make the thrilling crash-and-burn scenes, about a hundred motorcycles and cars were destroyed.

Other than these difficult scenes, the two leading actors of the film also raised eyebrows in the film industry. Lee Min-ki, who plays the role of the motorcycle deliveryman, and Gang Ye-won, who plays a K-pop singer who ends up joining Lee on the mission, are rising stars.

But Lee, who says he enjoys going fast in real life, drives the motorcycle in most scenes by himself without a stunt double, making the movie more realistic.

If “Quick” broadens the scope of motorcycle films in Korea, the release of “Sector 7” is meaningful in Korean film history. Three-dimensional films have become a dime a dozen in Hollywood, but they are still untapped territory in Korea.

It took five years including pre-production to complete “Sector 7.” The actors, who had no previous experience in 3-D films, had trouble finishing each scene. In addition, the monster movie genre is still new in Korea.

“I had to explain the monster to the actors because it doesn’t exist on the set. It was the most difficult part for me,” said director Kim Ji-hun at a recent press screening of the film.

“But I believe this film will pave the way for upcoming 3-D Korean films in the future,” Kim added.

A majority of scenes in the film were shot in a studio located in Paju, Gyeonggi, and they were later completed with heavy computer graphics.

“Sector 7” is also unique in that it features a female warrior as the lead, which is hard to find in most Korean films. Actress Ha Ji-won, who played a stunt woman in the drama series “Secret Garden” earlier this year, goes further than that in “Sector 7.”

Ha learned to scuba dive and got a motorcycle license to better express her character, Hae-jun, who spends most of her time at sea.

“I thought it would be awesome if an actress could drive a motorcycle [without a stunt double],” Ha told reporters. “One sure thing is this is the most challenging work I’ve ever done.”

While Ha’s biceps and muscular body even garnered her a new nickname - the Korean Angelina Jolie - Ha also showed a more sensitive side, becoming emotional as she answered questions at the press screening.

Both “Quick” and “Sector 7” are available with English subtitles at Myeongdong Station, Guro, Gangnam and Yongsan CGVs.