With Ettinger’s death, reflecting on cryonics

With Ettinger’s death, reflecting on cryonics 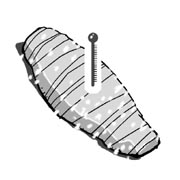 Benjamin Franklin, the 18th century American statesman and scientist, was interested in the preservation and resurrection of the human body after death. One day, he spotted three drowned flies inside a bottle of alcohol. When he let them dry, two of them came back to life. After the incident, he wrote to a friend, “I wish it were possible ... to invent a method of embalming drowned persons, in such a manner that they might be recalled to life at any period, however distant; for having a very ardent desire to see and observe the state of America an hundred years hence, I should prefer to an ordinary death, being immersed with a few friends in a cask of Madeira, until that time, then to be recalled to life by the solar warmth of my dear country!”

Two-hundred years later, Franklin’s absurd idea began to materialize. American physicist Robert Ettinger proposed a theory of preserving the human body by freezing it. In 1962, he published “The Prospect of Immorality” and claimed that the future of cryonics depended on how to revive the frozen body. He also proposed that minus 196 degrees Celsius, the boiling point of liquid nitrogen, would be the ideal temperature to preserve the body for centuries.

Five years later, the first person was frozen with the intention of future resuscitation. James Bedford, a University of California psychology professor, asked just before he died of lung cancer to be frozen and preserved. Currently, there are more than 220 bodies frozen and preserved in the United States and Russia. Nearly 2,000 more have signed up for cryopreservation.

Cryonics is the human struggle to attain immortality. Ancient Egyptians made mummies in their desire to be resurrected. The cryopreserved are modern day mummies. However, resuscitation is not such a vain dream. When nanotechnology is further developed to prevent brain cell damage in the course of thawing, it is theoretically possible to resuscitate a dead person from cryopreservation.

Ettinger passed away last Saturday, and his body is to be frozen and preserved at his Cryonics Institute until resuscitation is possible. His mother and two wives have already been preserved. Even if resuscitation becomes possible, it is still unknown if it would bring happiness to humanity. The line between life and death becomes obscure, and people may be confused if they end up living in different time periods with different values. Ettinger’s death makes us think about the true meaning of life and death.