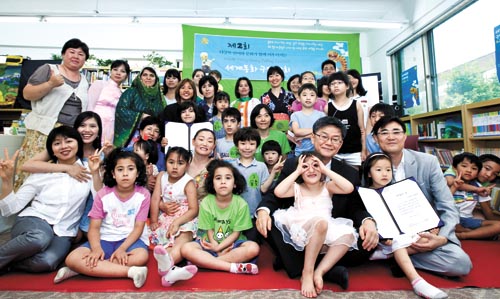 A multicultural family event at the children’s library ‘Modu.’ Provided by STX Group


STX Group is promoting a wide range of social contribution and ‘shared-growth management’ schemes in areas such as social welfare, education and school support, culture and art, sports and local society.

The foundation supports tuition fees and awards 500,000 won as a monthly allowance. For students studying abroad the foundation provides $50,000 a year.

Along with the scholarship foundation, the welfare foundation aims to provide housing to neglected people through the ‘Sharing House’ project. The project does everything from building new houses to repairing bathrooms. So far a total of seven houses have been built in the Gyeongnam region and about 100 houses have benefited from repair work.

The multicultural children’s library, Modu, is one of the representative projects of the social contribution group. STX opened its No. 1 library in Seoul in September 2008. Since then it has opened six other libraries in Changwon, Busan, Gumi, Daegu and Chungju as part of the company’s multicultural family support project.

These relationships were first started by STX and STX Pan Ocean executives in 2009 and the following year it spread to other subsidiary companies in the Gyeongin Region: STX Offshore and Shipbuildng, STX Heavy Industries, STX Construction and STX Energy. From this year it will expand to the executives of the subsidiary companies in the Gyeongnam region.

Twice a year employees of STX group participate in the ‘STX Happy Volunteer Week’. This year is the sixth ‘STX Happy Volunteer Week’ and 5,200 employees will participate. During this period the STX employees will participate in 182 programs in Seoul, Gyeonggi and Gyeongnam, helping out people in financial difficulty, poorly fed children, senior citizens living alone, disabled people as well as other activities to help farmers and donating blood.