After disaster, death toll stands at 47

After disaster, death toll stands at 47 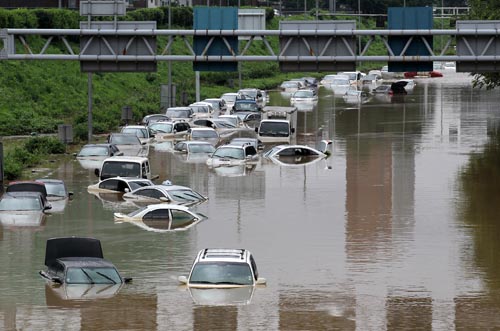 Dozens of vehicles were submerged on the flooded Olympic Expressway in Yeouido, western Seoul. The Korea Meteorological Administration issued a flood watch yesterday near Han River regions, including Hangang and Jungrang Bridges. [YONHAP]


The death toll from the devastating rain in the central region soared to 47 yesterday, as rescue workers continued to search for the missing and as soldiers and civil servants were mobilized for recovery operations around the nation.

According to the Central Disaster and Safety Countermeasures Headquarters, the torrential downpours that began Tuesday had killed 47 as of 5 p.m. yesterday, mostly due to landslides and floods. Four people were reported to be missing.

The landslide at Seoul’s Mount Umyeon on Wednesday killed 16 while one is still missing. Twenty people were reported to be injured in that disaster.

Rescue workers yesterday morning found the body of a 67-year-old woman who was reported missing after having been carried away in the landslide. She was found about 250 meters (820 feet) away from her home in Bangbae-dong, southern Seoul. With the discovery, the number of victims from the Mount Umyeon landslide rose to 16. 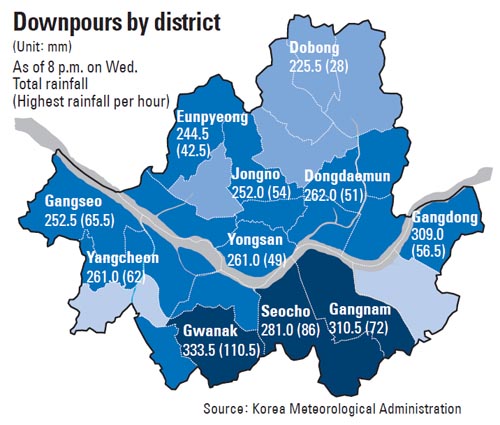 A landslide in Paju, northern Gyeonggi, destroyed a factory and killed three people, the center said. Seven others were killed in a landslide in Pocheon, Gyeonggi.

Evacuation orders were also issued for northern Gyeonggi areas, where more damage is expected. Residents near Gonjiam Stream in Gwangju, Sin Stream in Dongducheon and Dongmun Stream in Paju were ordered to leave those areas. As of yesterday afternoon, 1,270 were still taking shelter in other regions.

While the rain subsided yesterday afternoon, criticism of the Korea Meteorological Administration grew stronger. Although the weather agency had forecasted rain five days before the downpours started on Tuesday, the forecast on the amount was off significantly.

At 5 a.m. Tuesday, the weather agency warned of about 30 millimeters (1.18 inches) of rain with thunderstorms in Seoul, Gyeonggi and Gangwon, and with a possibility of torrential downpours of more than 120 millimeters in some places. The forecast, however, was updated to more than 150 millimeters of downpour at 5 p.m. and 250 millimeters of rain Wednesday 5 p.m.

The agency especially faced criticism for its forecast in Seoul, which saw more than 400 millimeters of rain on Wednesday alone.

“We did forecast torrential downpours in time and issued warnings, but giving an accurate forecast of the amount is difficult,” said a weather agency official. “And the rainfall was particularly unpredictable because even in Seoul, the amounts varied largely between districts.”

“It is unprecedented to see such a strong downpour in such a short period of time, and no other city in the world can probably withstand it,” Lee said. “We can’t prevent a disaster with the safety standards of the past, so we must upgrade them and sternly enforce them.”

Although the downpours subsided temporarily yesterday afternoon, the Central Disaster and Safety Countermeasures Headquarters still warned the public to prepare for more disasters. “Since Tuesday afternoon, up to 661 millimeters of rainfall came to Seoul, Gyeonggi and northern Gangwon,” said the center.