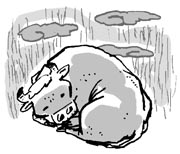 Goryeo period Buddhist monk Gakhun wrote “Lives of Eminent Korean Monks” in 1215. According to Venerable Gakhun, the Indian monk Marananta arrived in Korea in 384, the first year of the reign of King Chimryu, the 15th king of Baekje. The purpose of Marananta’s visit was to bring Buddhist teachings to Korea. However, while he travelled from India to Baekje via China, he became ill because he was not accustomed to local food and water. Upon his arrival in Korea, he drank spring water from a mountain in what is now Seoul and recovered. To celebrate its healing power, he established Daeseong Chodang, which is the predecessor of Daeseong Temple. Located on Mount Umyeon, Seocho-dong, the temple was destroyed during the Korean War, but was rebuilt in 1954.

The 293-meter tall mountain is named Umyeon, or sleeping cow. After a tunnel was constructed through Namtaeryeong Ridge, Mount Umyeon was dissected. Foreign residents and tourists say one of the charms of Seoul is its easily assessable mountains and Mount Umyeon offers great hiking trails. On the morning of July 27, a torrential rainstorm caused a landslide in the area, killing 16 people.

Venezuela is notorious for landslides. In December 1999, the equivalent of two years worth of rain inundated Vargas State. On the third day of rain, a devastating mudslide roared down the mountain at 50 kilometers per hour. The slums at the foot of the mountain were completely buried, killing more than 30,000. Two years later, Venezuela suffered another such disaster, which resulted in casualties of 25,000. Although the forces of nature could not have been avoided altogether, imprudent urban development was criticized for making the damage worse.

Perhaps the Nature and Ecological Park, which opened in July 2004, was the cause of the disaster. The park was created as a place to learn about nature and promote the importance of the ecosystem. It is ironic that a park was artificially created by changing the face of the mountain, which was nature in and of itself. Mount Umyeon was also designated a toad protection area. It brings to mind Indian reservations in the United States, which were a pretentious gesture following the cruel treatment of Native Americans.