The architect of Pyeongchang’s bid presentations

The architect of Pyeongchang’s bid presentations 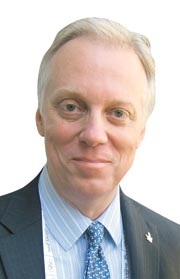 Pyeongchang’s refined and poignant final presentation in Durban, South Africa, on July 6 highlighted a new look for the Korean city that many said became distinctively “internationalized” from its two previous unsuccessful bids to host the Winter Olympics.

One significant factor in Pyeongchang’s transformation and eventual victory over Munich and Annecy, France, was Terrence Burns, the architect and conductor of Pyeongchang’s presentation.

Burns, a 53-year-old American, directed Pyeongchang’s entire slate of presentations beginning in Acapulco, Mexico, in October 2010 and ending early this month in Durban.

From drafting presentations and perfecting pronunciations to even choreographing hand and feet placement, Burns was behind it all. Even President Lee Myung-bak, one of Pyeongchang’s nine presenters in Durban, was Burns’ pupil, telling the president that he, like the others, needed to train for at least one hour.

Burns said he appreciated Lee’s offer to present in English, rather than in Korean as he was initially advised to do.

“That was a brilliant suggestion [from Lee] because it again illustrated the Korean people’s desire for this bid, the perseverance and the humility of your culture,” Burns said in an e-mail interview. “It was a very powerful performance.”

But before signing on with Pyeongchang’s bid for the 2018 Games, Burns was the enemy. Helios Partners, an international sports marketing firm where he is president, worked with Vancouver and Sochi, Russia, for the 2010 Games and 2014 Games, respectively, defeating Pyeongchang both times. Dmitry Chernyshenko, chair of Sochi’s bid committee, once told media that the Russian city could not have won the 2014 Winter Games without Burns. When Pyeongchang succeeded in recruiting him, one foreign journalist predicted Pyeongchang’s victory.

Burns said he was happy to join the Pyeongchang team because it was in a country that his father loved. His father, who served in the U.S. Army during the Korean War, was touched and inspired by Koreans and spoke of the country often, he said.

“So, for me, it was an honor to work on this bid in memory of my father .?.?. I think he would have been very proud to hear Dr. Rogge say the word ‘Pyeongchang’ in Durban,” Burns said. “I was quite emotional thinking of him at that moment.”

Burns said his job with Pyeongchang started with changing its old bid slogan, which emphasized peaceful unity for Korea.

He said many people told him that saying the Pyeongchang Games would be a “peace Olympics” - bringing the two Koreas together - was too old, not believable and not even relevant to the Olympics.

“I agreed with that, and when I worked for Sochi I was happy to see Pyeongchang 2014 continue to use that message because I knew it would not work,” he said.

He said the new slogan, “New Horizons,” was distinctive and touched on what is needed not only for Korea but also for other parts of the world: opportunity and potential for growth of winter sports in Asia and beyond.

Burns said Korea’s presenters did a good job of hitting the right note on being Korean, but also being international, compared with the Tokyo 2016 presenters who he said had tried too hard to be something they were not.

Pyeongchang’s presenters also did a “flawless” job of delivering an emotional speech, thanks to Koreans’ work ethics, he said.

“With some bids one has to really push people to get them to practice, [but] with Pyeongchang, the speakers were pushing me for more practice,” he said.