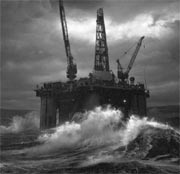 “Sector Seven,” Korea’s first 3-D blockbuster to be released in early August, was inspired by the Seventh Mining Block, which is in the Korea-Japan continental shelf development zone south of Jeju Island. The story of the zone was described in singer Jeong Nan-i’s song from 1979, “The Seventh Mining Block.”

Citizens celebrated the news. The first oil shock in 1973 forced schools to begin breaks earlier than scheduled. Neon signs and street lights were turned off at night. Newspapers celebrated the “revolutionary discovery” and called Korea a petroleum producing country.

However, it was soon learned that the Yeongil Bay reserve was not properly explored. Petroleum and gas were said to have been found in three spots in the Seventh Mining Block, nicknamed the “second Persian Bay,” but Japan abandoned the project based on the belief that it would not be profitable.

To the generation who lived during the time when Korea was a developing country, the Seventh Mining Block is a painful memory. It may be of some consolation that some countries are still struggling, even though they have abundant petroleum reserves. But even if a country is flushed with “oil money,” a small privileged class may enjoy enormous wealth while average citizens struggle with poverty if the government fails to manage its resources and revenue. This is known as the “oil curse”; Nigeria and Venezuela are among the largest oil producers, but their citizens have not benefitted from the fortune. In Venezuela, oil was called the “devil’s excretion.”

Those who remember the hype of the Seventh Mining Block may wish to live in a country with abundant oil reserves even if it means a curse. In the movie “Sector Seven,” Hae-jun (Ha Ji-won), joins the drilling project to continue her father’s dream. But no matter where they drill, the black gold doesn’t come. Instead, they are attacked by a monster. Even in a fantasy movie, the possibility of becoming an oil-producing country is not allowed. After all, having an oil reserve is an extremely rare blessing.