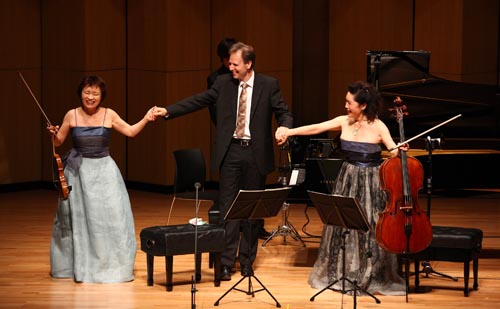 Chung Kyung-wha, left, and Chung Myung-wha, right - co-artistic directors of the Great Mountains Music Festival - bow to the audience after playing Brahms Trio No. 1 in B Major with pianist Kevin Kenner on Friday at the Alpensia Concert Hall. Provided by Communique


PYEONGCHANG, Gangwon - While the freak rains that began last Wednesday in Seoul and other parts of the country claimed dozens of lives, Pyeongchang enjoyed unseasonably calm weather over the weekend as it began hosting the eighth edition of the Great Mountains Music Festival under new leadership.

Pyeongchang, which recently won the right to host the 2018 Winter Olympics, was crowded with VIPs from across the nation who braved the rain to celebrate a new beginning for the international classical music festival.

Guests of their performance at the Alpensia Concert Hall on Friday, on the second day of the festival, ranged from Hong Ra-hee, the wife of Samsung Group Chairman Lee Kun-hee, to Korea Tourism Organization CEO Lee Charm, as well as over 50 diplomats from around the world and dozens of leading musicians from home and abroad.

Donning blue dresses made of moshi, a traditional Korean fabric, by noted hanbok designer Lee Young-hee, the sisters began their first joint performance in seven years by showing their condolences to the victims of the unexpected flood.

“We dedicate this piece to those who have been victimized by the torrential rains and their surviving families,” said Kyung-wha, before she launched into Brahms Piano Trio No. 1 in B Major.

The concert was part of the festival’s “Distinguished Artist Series,” which is divided into nine sections. Running under the theme “Illumination,” the festival this year celebrates the works of genius that marked the last years of various composers’ lives, including Mozart, Schubert, Brahms and Chopin. The series of concerts also included repertoires by Korean and Western contemporary composers.

American pianist Kevin Kenner accompanied Kang and the sisters, filling the spot long occupied by the Chung’s younger brother, maestro Chung Myung-whun, 58, of the Seoul Philharmonic Orchestra. The three siblings began performing together from the 1970s as the “Chung Trio.”

At a press conference on Saturday, Kyung-wha said she was “absolutely enchanted by the fact that we were on stage again together.”

“I had to turn my head the moment I heard my sister play the very first note, since I was about to shed tears,” she added.


Due to a finger injury, Kyung-wha quit performing in 2005 and has since taught at Julliard. She resumed her stage career in May of last year, performing her favorite Brahms Violin Concerto in D Major with Britain’s Philharmonia Orchestra.

As students, the world-renowned musicians lived in New York together. Kyung-wha, nicknamed “witch of the string” for her charismatic performances, decided to stay in the city when her older sister returned to Korea in 2001 to teach at the Korea National University of Arts.

Myung-wha is married to Samuel Koo, a former journalist and the residing chairman of the culture and tourism committee at the Presidential Council on Nation Branding. Koo is assisting his wife as administrative director of the festival by raising funds through his established network.

Myung-wha said the Chung Trio is planning to reunite this year for a concert in memory of their mother, who passed away in May of this year.

Amid persistent requests for an encore, Son, with her long, shiny hair flowing free, played two jazzy and flamboyant arrangements of Mozart’s Turkish March - one by Turkish pianist Fazil Say and the other by Russian pianist Arcadi Volodos. When the prodigious 25-year-old was done, Kyung-wha rose to the edge of her seat and gave a standing ovation, crying out “Brava” and inspiring dozens of others to follow suit.

Those who missed the first few concerts may consider vacationing this coming weekend at the scenic spot, which lies at an altitude of 700 meters.

Myung-wha is set to play Brahms Clarinet Trio in A minor on Thursday, while her younger sister will perform Frank’s Violin Sonata in A Major the following day.

The festival, which ends on Aug. 13, aims to join the ranks of international music festivals such as Aspen, which runs a music school during the period and provides an intensive two-week program for 160 students of music from eight countries.

They study with world-renowned faculty members, take private lessons and play chamber music and attend master classes by those established musicians who participate in the festival.