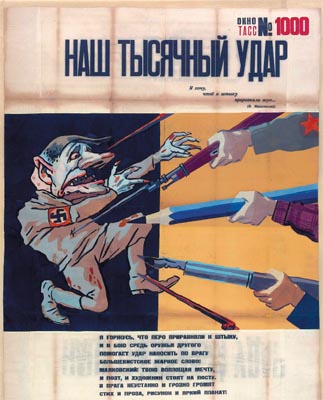 One of the Chicago Museum’s unearthed Soviet posters is seen in this image released July 28. [REUTERS/YONHAP]

CHICAGO - The horrors and heroism of World War II are given a fresh look in an Art Institute of Chicago exhibition of rediscovered Soviet propaganda posters, which depict Hitler as blood-thirsty, anxious and perverse.

One poster in the “Windows on the War” exhibition, opening to the public on Sunday, features a caricature of a worried Hitler hiding a crude hand gesture under his cap while Joseph Goebbels orates nervously.

Another poster produced by Moscow’s TASS studios depicts a fearsome, wolf-like Nazi drooling as Allied bombs fall; and another depicts heroic partisans blowing up a Nazi supply train and firing at escaping soldiers.

“Despite the tyranny of Stalin, creativity flourished” in the former Soviet Union as artists felt motivated to contribute to the war effort, said Jill Bugajski, one of the curators of the exhibition of some 250 posters, paintings and mementos that continues through Oct. 23.

“I want the pen to be on par with the bayonet,” wrote poet and poster contributor Vladimir Mahakovsky, who wrote captions and poems that adorned the posters.

A cache of the now-brittle posters were discovered in 1997 sitting on a shelf in one of the Art Institute’s storage closets during a renovation. Two paper rolls and 26 parcels containing the forgotten works were unfolded, restored and some placed behind plexiglass for the exhibition.

Three hundred artists and writers produced some 1,400 poster designs in Moscow’s TASS studios, which was part of the telegraph and news agency. 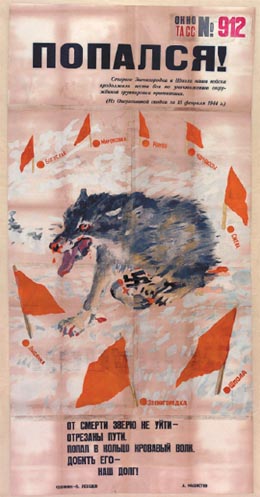 Another poster in the Art Institute of Chicago exhibition.

Using up to 60 stencils for each poster to layer still-bright paint on cheap newsprint, many of the 800,000 TASS posters produced were lost or forgotten.

They were intended to “create a mood of urgency while visually aggrandizing the Soviet [soldier], defining the Nazi enemy as vile and subhuman, and emphasizing the woeful suffering of the Soviet people,” museum exhibitors said.

Inspired by the prewar mocking of “degenerate art” by the Nazis, who also put on an anti-Bolshevik art exhibition, the Soviet artists took liberties with Communist “social realism” to create shocking, sometimes humorous, images.

The hand-painted posters were distributed to newspapers, museums, libraries and “Russian friendship” societies around the world by the Soviet propaganda operation, the USSR Society for Cultural Relations with Foreign Countries.

Frequently placed in the vacant windows of war-time shops and reprinted in newspapers, the posters have been largely forgotten since the war, curators said.

Each illustration had its purpose, which seems distant now in light of the subsequent Cold War and today’s up-and-down U.S.-Russia relations: reinforce the Anglo-Soviet alliance against Germany that was signed in September 1941, and lift recruitment and spirits among the beleaguered Allies.

The 157 posters selected for the show offer a diary of the war - from crushing Soviet losses, to the defense of Stalingrad, to the defeat of Germany in 1945. Among them is a warning to Soviet soldiers that the punishment for retreating was death.

Also on view are haunting photographs of Soviet prisoners of war, and one of eight grimly violent, monumental “The Year of Peril” series of paintings by American artist Thomas Hart Benton.