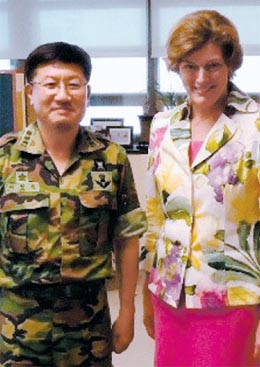 U.S. Ambassador Kathleen Stephens said on Thursday that she recently reunited with one of the students she taught in the 1970s as a Peace Corps volunteer, describing the meeting as another reminder of her “unbreakable” ties with Korea.

The meeting between Stephens and her former student, Lee Chul-won, who is a colonel in the Army, took place after Lee’s wife spotted a 1976 photograph Stephens had taken of him and posted on the U.S. Embassy’s Web site.

After Lee sent a letter to Stephens, the ambassador invited him to visit the embassy, Stephens wrote in an article she posted on her blog.

“It’s another reminder that connections in Korea are forever,” Stephens said in her article titled “Unbreakable Ties.”

Stephens, well known for her affection for Korea dating back to the 1970s, has recently become more popular for her tireless efforts to mix with ordinary Koreans.

After graduating from the Korean Military Academy, Lee has served a full career in the Korean Army, including service in the Philippines, East Timor and Iraq. Currently, Lee serves in a front-line unit at the Demilitarized Zone.

Recalling Lee as a “very bright, hard-working and responsible” student, the U.S. ambassador said, “In many ways, his career embodies the spirit of ‘Global Korea’ that has transformed this country.”

Stephens is preparing to step down this fall as ambassador to Seoul after three years. U.S. President Barack Obama nominated Sung Kim as the next ambassador, the first Korean-American to become Washington’s envoy to Seoul.