By visiting homeland, they adjust here

By visiting homeland, they adjust here 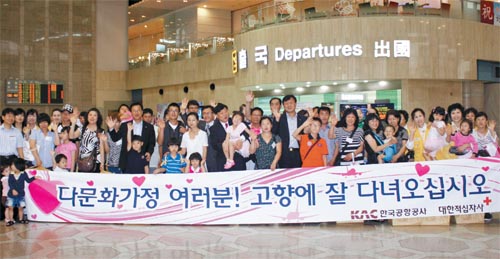 Participants of the homeland visitation program stand behind a placard wishing them a safe trip on July 12 at Gimpo International Airport before their departure. Provided by the Korean Red Cross


At Gimpo Airport last month, 15 families posed for one last photo before their departure, the flashing cameras capturing their elated faces. In front of them was a large placard that read: “Multicultural families, we hope you enjoy your time in your homeland!”

It was the beginning of a very special journey for 15 immigrant women and their families: they were going to visit their native country - China - for the first time in years.

The families were given an all-expense-paid nine-day trip through the “Homeland Visitation Program for Multicultural Families,” which is sponsored by the Korean Red Cross and Korea Airports Corporation. The latest trip left Seoul on July 12.

For Sen Sokeng, a Cambodian native who took part in the program in April, it was the first time she was able to reunite with her family in over three years. “I was very excited after learning that I was going to see my family back home once again,” she said, who married her Korean husband in 2008.

Like Sen’s family, a multicultural family refers to a family composed of parents of different nationalities.

In Korea, multicultural families are largely created through marriages between Korean men and women from China or Southeast Asia, including Cambodia, the Philippines and Thailand.

These marriages are most prevalent in Korea’s rural regions, where, compared to urban areas, men have difficulty finding wives. Many turn to foreign countries to find their spouses, mostly from poor countries where a handsome bride price can help seal the deal.

The international marriages often play on the relative poverty of the migrant families and just as frequently result in economic privation and the inability to afford trips to the wives’ home country.

Estranged in a new environment away from the comforts of home, the migrant wives are forced to overcome the many cultural hurdles that come with living in Korea: learning the Korean language, making Korean food and adjusting to the demanding agrarian lifestyle.

“I missed my family so much when I first came to Korea. Although I did make phone calls, it is not the same as being there in their presence,” Sen said, adding that the most difficult part of living in Korea is the Korean language barrier. “Learning Korean by myself has been the most difficult part. I still have a long way to go.”

Cho Sung-ah, the head of the business team of the Korean Red Cross, said the home visitation program, first launched the project in February last year, was designed to assist the women’s integration into Korean society, something that will become increasingly more urgent in the years to come.

A study by the Center for Multicultural Korea found that while multiethnic couples make up one out of ten marriages today, an estimated 21 percent of Korea’s total population will be from multicultural families by 2050.

The loneliness that many brides feel after getting married, many say, is one of the challenges that prevent immigrants from being accustomed to the new environment.

“The program not only grants the immigrant wife a chance to see their families again, but also fosters for the husband a greater sense of compassion and understanding through the hands-on experiences in his wife’s homeland,” said Cho.

Cho added that the children suffer as well, divested of ways to get in touch with their non-Korean heritage.

“The children of the families get to visit their grandparents on the mother’s side and get in touch with their non-Korean roots, which will aid the process of settling down,” she added.

Since the program’s establishment, more than 180 multiethnic families from around the country have participated in the program.

The program has thus far organized and funded trips with a focus on developing countries in Southeast Asia such as the Philippines, Cambodia and Vietnam. The send-off on July 12 marked the program’s eighth group.

“We were looking for an opportunity to engage in effective service activities,” said Joseph Yu, a Korea Airports Corporation official. “When we came upon this idea, we realized that it was the perfect way to employ the assets of our organization to help out the multiethnic community in Korea.”

According to Korea Airports Corporation and the Korean Red Cross, the families go through a selection process that engages in a quantitative evaluation of the families’ monthly income, number of family members and the period of time for which the wife has not visited home.

Moreover, the selection process has a personal component, which considers the wives’ character, openness, attitude and willingness to engage in social services.

“All of these families are good, hardworking families whose wives have not seen their family back at home for two years or more. They deserve this opportunity,” said Yu.

Upon selection, each family receives free round-trip airplane tickets along with 500,000 won ($470) of spending money. The Korean Red Cross and Korea Airports Corporation said they aim to make the program available to more families.

Malingam Samai, an immigrant from Thailand who has been living in Korea for more than 10 years, recounted the experiences of her visit, which she made through the program in July of last year.

“I had the most wonderful time during my trip. My Korean family and my Thai family exchanged stories, and we all learned something more about each other,” she said in nearly perfect Korean.

“Seeing my family back home gave me the confidence to be more independent. It also strengthened the relationship between me and my husband.”