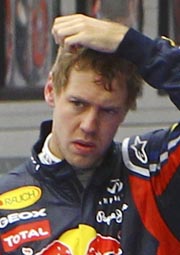 BUDAPEST - Formula One championship leader Sebastian Vettel demanded improvements from his Red Bull team after it failed to convert another pole position into victory at the Hungarian Grand Prix Sunday.

Both McLarens, including eventual race winner Jenson Button, overtook Vettel within 14 laps as the Austrian team failed to bring home victory for the fifth time in 11 races it has started from first this season.

“I’m not completely happy after starting from pole, I thought we could win the race,” Vettel said from the Hungaroring. “The most important message of the last two races is that McLaren are very competitive and we’re not happy about that.’’

Vettel pressured Button for the victory right until the end of the 70-lap race, finishing 3.588 seconds behind the Briton in second. While the Red Bull showed good pace late, it came up short again after a clean start.

“I think second today is an important step although the win was in reach today, but we couldn’t get it,” the German driver said. “There was a chance and we didn’t use it, so we have to look into that.’’

Vettel’s second place stretched his already dominant lead in the standings to 85 points over teammate Mark Webber, who finished fifth after starting sixth on the grid. With a race win worth 25 points, Vettel is in control with eight races left and his closest rivals at least three victories away.

Lewis Hamilton of McLaren is 88 points behind and Fernando Alonso of Ferrari is 89 points adrift, despite both teams making significant gains on Red Bull in the last races.

“I don’t know how many points and I don’t care - I don’t calculate,” Vettel said. “I don’t think about the championship when I’m racing, I think about trying to win.”

Webber finished nearly 50 seconds behind his teammate after making the wrong tire call during a race hit by a constant drizzle.

“It was quite an enjoyable grand prix, up until when you make the wrong decisions from the cockpit,’’ the Australian said. “That’s the roll of the dice you’ve got to make - it was my call. I decided to roll the dice and, if it worked, obviously you win big. If you lose - I lost some positions. That’s the way it was today.’’

“The competition is quite fun to watch with three different teams fighting for wins,” the two-time world champion said after securing his fourth straight podium finish. “The month of July has been very good for us; we can now fight for victories.’’

The season continues on Aug. 28 with the Belgian GP.