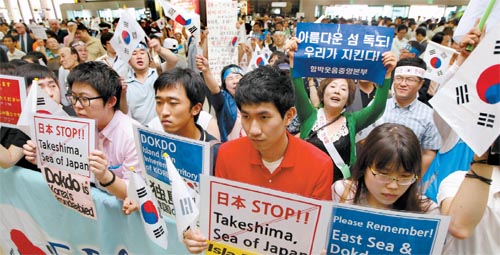 About 400 protesters gather yesterday at Gimpo Airport to denounce Japan’s territorial claim over the Dokdo islets as three Japanese lawmakers arrived to visit the nearby Ulleung Island. [Joint Press Corps]


Three right-wing Japanese lawmakers who arrived in Korea yesterday in an apparent move to bolster Japan’s territorial claim over the Dokdo islets were denied entry and returned home after waiting for hours at a Seoul airport.

The Korean government refused their entry over their plan to visit Ulleung Island to counter Seoul’s tightened grip of nearby Dokdo.

The territorial dispute between the two neighbors could take a turn for the worse today with Japan scheduled vote on its annual defense white paper, which contains fresh claims over the rocky outcroppings.

Yoshitaka Shindo, Tomomi Inada and Masahisa Sato, all from the conservative opposition Liberal Democratic Party, were denied entry after landing at Gimpo International Airport at 11:10 a.m. on an All Nippon Airways flight.

The Ministry of Justice said it gave an ultimatum to the lawmakers at 6:50 p.m. to board an 8:10 p.m. flight back to Japan or be transferred to an airport facility that processes illegal immigrants. At that point, the lawmakers decided to leave, the ministry said.

Shindo, before he boarded the plane, told reporters, “I’ll be back.”

The Ministry of Justice and the Ministry of Foreign Affairs and Trade said the Japanese lawmakers were advised to return but initially refused, officials said.

“The lawmakers attempted to clear customs but immigration officials escorted them to a waiting room for repatriation, explaining the government’s decision to ban their entry,” said a Seoul official. 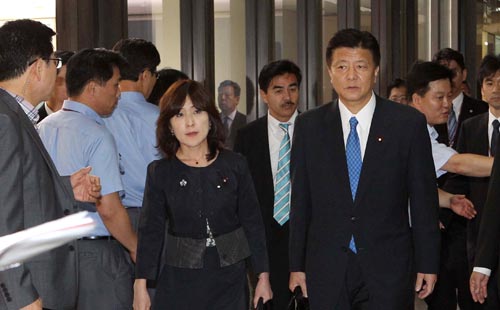 
The official said immigration officials told the lawmakers that their visit was apparently aimed at taking issue with Korea’s measures to strengthen its effective rule over Dokdo and thus ran counter to Korea’s national interests.

“We are not terrorists, and we don’t understand on what grounds Korea is saying we are threatening the safety of the Korean border,” Shindo told reporters at the airport.

Article 11 of Korea’s Immigration Law permits entry bans if there are sufficient grounds to believe a foreigner has plans to hurt the interests of Korea or the safety of the Korean public.

On Sunday, the government denied the entry of a leading figure of a right-wing Japanese civic group on the same grounds after he landed at Incheon International Airport.

Shindo announced on July 15 that he would go to Ulleung, 87 kilometers (54 miles) northwest of Dokdo, with three other LDP lawmakers. Dokdo, Korea’s easternmost islets, is claimed by Japan, which calls them Takeshima.

Shindo, Inada and Sato - all members of the LDP’s special committee on territory - said they wanted to tour the Dokdo museum on Ulleung.

Their planned Ulleung visit was met with angry responses in Korea, with civic groups considering plans to foil their visit, leading Seoul to notify Japan that the safety of the lawmakers could not be guaranteed.

Tokyo hit back yesterday with a protest about the entry ban via telephone at around 11:50 a.m. to Seoul’s Foreign Ministry, the ministry officials said.

Japan will vote today on its annual defense white paper.

According to the Foreign Ministry, the Japanese government plans to hold a cabinet meeting today to decide the contents of its annual defense white paper.

Since 2006, Japan’s white paper has claimed that the territorial dispute over Dokdo, along with its dispute with Russia over the Kuril Islands, remains unresolved. The proposed content of the 2011 paper is known to contain the same expression.