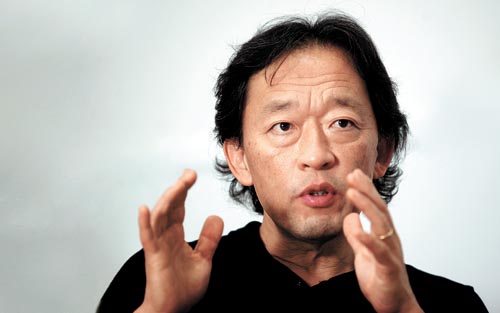 Chung Myung-whun speaks about his upcoming tour of Europe with the Seoul Philharmonic Orchestra at the SPO office last Wednesday. The tour of Austria, Scotland, Germany and the Netherlands will take place in August. By Jeon Min-kyu


When maestro Chung Myung-whun, 58, took the baton for the Seoul Philharmonic Orchestra in 2005, his assessment of the city orchestra was that it ranked at the bottom of the list of all the orchestras in the world. Four years later, he told reporters that the SPO had moved up a level and in a meeting with reporters last week Chung said the orchestra is now in the second-highest tier.

That shining accomplishment, many classical music observers have said, is largely thanks to the pianist-turned-conductor’s relentless effort to recruit quality musicians from home and abroad; lay off unqualified musicians through frequent auditions; raise funds through concerts; and provide orchestra members with opportunities to hone their ensemble skills.

SPO’s upcoming European tour, scheduled for Aug. 19-27, is part of Chung’s strategy to take the orchestra one step further.

“We are not one of the world’s top orchestras,” Chung said at the SPO office last Wednesday. “But while top-notch orchestras in Europe and the United States have already peaked, and few of them have the potential to grow further, we Koreans still have a great deal of room for progress.

“I am sure a successful tour of Europe will help us mature.”

In its second European tour, the orchestra will travel to four countries - Austria, Scotland, Germany and the Netherlands - to participate in international cultural festivals such as the Robeco Summer Festival in Amsterdam and the Edinburgh International Festival.

The repertoire will include Mussorgsky’s “Pictures at an Exhibition” and Tchaikovsky’s Symphony No. 6, widely recognized as “Pathetique.” These pieces are known to be immensely difficult and philosophical and are frequently performed in Europe, which means the SPO is facing a major challenge while also taking a risk in playing them there, Chung said. Before going on tour, the orchestra will give a preview concert at Seoul Arts Center Concert Hall on Aug. 9.

Prior to the tour, the orchestra landed another breakthrough in April. It signed a contract with Universal Music Group International’s Deutsche Grammophon for two albums a year until 2015, becoming the first Asian orchestra to have such a long-term deal with the label. The first album, released on July 19, features Debussy’s “La Mer” and Ravel’s “La Valse” and “Ma mere l’oye.”

The prestigious recording label, established in 1898, accounts for more than 40 percent of the classical recordings across the globe and has contracts with world-renowned artists such as conductor Daniel Barenboim, violinist Anne-Sophie Mutter and pianist Martha Argerich,

Chung also has a record deal with the label, which on July 24 released a box set with a collection of his recordings as a conductor from 1991 until 2010.

In addition to leading the SPO, Chung is also the director of the Asia Philharmonic Orchestra, which is touring Korea, China and Japan from July 30 to Aug. 4. Chung became involved with the orchestra when the city of Tokyo asked him to conduct the opening performance of the Tokyo International Forum, a new cultural complex, in late 1995. He in turn proposed organizing a pan-Asian philharmonic orchestra, of which he would direct. The orchestra, which counts as members some of the best musicians in the world, was inaugurated in 1997 in the form of a performance-focused festival orchestra. Its main goal is bridging social, political and economic gaps with cultural influence.

The following are excerpts from Chung’s interview with select members of the press last week.


Q. It’s been five years since you assumed leadership of the SPO. How would you assess its progress so far? 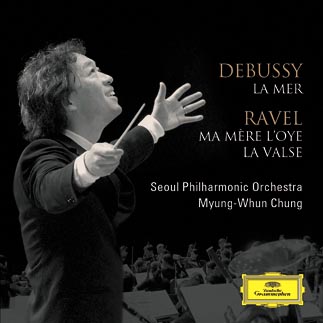 The SPO’s first album with Deutsche Grammophon was released July 19. It is part of a larger deal for two albums a year until 2015, making the SPO the first Asian orchestra to have such a long-term deal with the label.

A. I think the orchestra has ascended to the international level. Otherwise it would have been impossible for us to do the upcoming European tour.

I would say there are roughly four levels in the hierarchy of orchestras around the globe. At the top, there are around 10 orchestras including those of Vienna, Berlin and Amsterdam. In the second level, there are 80 city orchestras at most. There are up to 200 in the third level and more than 1,000 in the last.

Before 2005, the SPO was in the fourth level. Now we have leapt into the second. But we believe that we will excel in the near future and it is important that we hold onto our dream of being in the big leagues.

How is the preparation for the European tour going?

Established musicians - me, in particular - don’t really focus on honing our technical skills through practice because we have already reached a certain level in that respect. And in music, being precise and setting a record speed when performing doesn’t necessarily lead to good results - unlike in sports, another favorite interest of mine.

When people outside Asia see us Asians, however, they mostly refer to the immense amount of time we spend practicing. But that doesn’t really create a positive image among Westerners. Japanese orchestras are renowned for assembling perfect ensembles, but... What I want to show to audiences abroad is that the SPO has moved away from stereotypical Asian music.

I want to show that our musicians can be more enthusiastic yet more free when it comes to interpretation and performance. Europeans tend to compare us to Japanese orchestras but I always tell them that the [stylistic] gap between Korea and Japan is much bigger than that between Italy and Germany.

Two young Korean pianists - Son Yeol-eum and Cho Seong-jin - took the second and third prizes at the 14th International Tchaikovsky Competition last month, 37 years after you won the second prize in 1974. What are your thoughts about their achievement?

Young Korean musicians are doing so well - it can’t compare to the period when I started in music. Cho started playing with the SPO at age 14 and is a prodigy.

But I wouldn’t say that competition is always good because I don’t really agree with the idea of classifying musicians as winners and losers. Still, it’s true that young musicians who become “winners” can obtain the chance to perform on stage. I want to help out more young musicians if fate allows.

SPO has recently released its first album with Deutsche Grammophon. How did the deal come about?

Not many recording companies are willing to release CDs with orchestras because there are so many of these products that the quantity has surpassed the saturation point. What makes the situation worse is that people are no longer willing to buy CDs.

The recording contract with DG came about by chance, though I have known the CEO of the firm for the past two decades. When I went to Europe for an opera last year I contacted him and we met in Venice. DG’s decision to invest in us was based on the long-term personal connection between the CEO and myself and the company’s need to increase sales in Asia, a rising market for classical music. Of course they also had trust in SPO’s potential.

The Asia Philharmonic Orchestra, which you have led for the past 14 years, is set to go on tour in Korea, China and Japan. What led you to become part of the orchestra?

Korea and Japan have had a difficult history. [As part of the post-colonial generation], I also agonized over how to overcome the disjunction between the two cultures because my parents often spoke in Japanese when I was young.

I really hated seeing them speak the language. But there is nothing better than music when it comes to resolving conflict.

Another reason I accepted the position has to do with fulfilling a larger humanitarian cause. The orchestra has brought Asian musicians closer, and top artists from the SPO are participating in the upcoming tour. In the longer term, I hope to see North Korean musicians in the Asia Philharmonic. Or I wish I could bring my orchestra to North Korea, which is what every major orchestra around the world aspires to do.

If someone offered me the chance to concentrate on the collaboration between South and North Korean musicians but said that I would have to quit everything I am doing now in return, I would be more than willing to do it.

The SPO is scheduled to play for the Korea National Ballet’s “Romeo and Juliet” - an unprecedented collaboration between a major orchestra and the state-run ballet troupe.

I have accompanied a full ballet only once in my life - for the Paris Opera Ballet. I have been reluctant to accompany another ballet because dancers are supposed to truly understand the music but I haven’t seen many who seem like they are capable of doing so. Now, however, the KNB has shown an enormous amount of progress compared to the past. I was impressed with their achievement, so I accepted their proposal.

Also, as a member of the first-generation of Korean musicians I feel it is my responsibility to help improve the level of music in this country.

1953: Born in Seoul as the sixth of seven siblings (including cellist Chung Myung-wha and violinist Chung Kyung-wha)

1960: Debuted with the Seoul Philharmonic Orchestra as a pianist

1975: Earned a bachelor’s degree in piano performance and conducting from Mannes College for Music

1978: Earned a master’s degree in conducting from Julliard School of Music

1997 to present: Music director of the Asia Philharmonic Orchestra

2001 to present: Special artistic advisor of the Tokyo Philharmonic Orchestra

2005 to present: Artistic director and principal conductor of the Seoul Philharmonic Orchestra