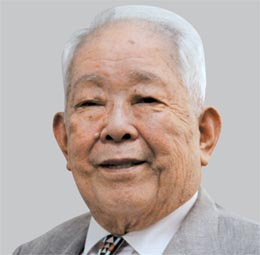 Masatoshi Koshiba, Professor emeritus at the University of Tokyo and a winner of the Nobel Prize in Physics in 2002

Masatoshi Koshiba, 85, a Japanese physicist and a winner of the Nobel Prize in Physics in 2002, will visit Korea to take part in the fifth Asian Science Camp in Daejeon, to be held between Aug. 7 and 13. Koshiba will be attending not only because he was the person who first came up with the idea to hold the science event in Asia, but also due to his desire to spread the importance of scientific education and the power of Asian science to Korea.

Koshiba, who is currently a professor emeritus at the University of Tokyo, said that what gifted minds should be fearing is the delusion that they know everything that they have learned so far. He said that it is important for people to always have at least two things that they want to investigate in mind, questions that are rooted in the core of scientific endeavors: fun and curiosity.

While Koshiba’s childhood dream was becoming a strong soldier in Japan’s military, the future physicist suffered from polio during the early stages of his life, which made his right arm uncomfortable during his middle school years. This struggle led him down a different path. While he was in the hospital, his teacher gave him a book on Albert Einstein - his first encounter with the world of physics. He graduated from the University of Tokyo’s physics department last in his class, but was never ashamed of that fact. He always felt that research was more important than studying books. Koshiba recently sat down with the JoongAng Ilbo and said that he was excited to meet with the young scientists in Asia.


Q. How did you first come up with the idea to open and hold the Asian Science Camp?

A. I saw young people in Europe inviting scholars that have won the honors of the Nobel Prize to a special camp and felt the same was needed to be set up in Asia, as the world is now becoming centered on the Asian region. With Lee Yuan-tseh, the Nobel Prize winner of Taiwan, I first opened the camp in Taiwan in 2007, and events followed every year in Indonesia, Japan and India. The main purpose and goal of this camp is for Asia’s younger generation to become one and grow dreams through positive discussions with respectable scientists, not taking into mind any political, religious or other external issues.

What do you expect out of this year’s camp that will be held in Daejeon?

I plan to take part in a lecture myself and talk about elementary particles, which is my main area of expertise. I also hope to talk to the young aspiring scientists about how to live through the modern day society and how to properly grow individual dreams through this camp.

I expect students to experience a camp in somewhat of a calm manner, as they should gather their thoughts on science and ask questions on issues that puzzles them.

In the modern day competitive world, such fierce competition to some extent is something that cannot be prevented. However, I still feel that science is all about being fun. The most important part of science is the role of the teachers to provide that fun aspect. Students who learn science from teachers who feel science is fun will also feel the same way.

It would be a good idea for graduate students to go back to their previous schools and teach science to the younger students. Schools can implement this system by giving students benefits in tuition according to the number of participation, making it unnecessary to spend additional budget.

First, I would like to say that basic science and applied science are two completely different fields. And they should be thought of as two different things.

Applied science basically is all about making useful things, which receives great support from the industries. However, basic science such as physics and astronomy have hardly any relation to the benefits of the industries. This is why industries show no interest. The government should help.

It was the same for me, but every Nobel Prize winner in Japan did not aim just for the prize. If you only think about the Nobel Prize, things become ugly in the end. It won’t be right to think too comfortably, but it is right for a scientist to research with a calm mindset.

If scientists don’t aim for a certain result or prize, but continuously think about “what will happen when I do this,” the big fish will be caught. Burdens should not be placed on certain scientists, like it is in the case of Korea, by claiming that he or she has a high possibility of winning a Nobel Prize.

Why do you think that there are many Nobel Prize winners in Japan?

In the end, I feel that it is all because we have researched with more fun and curiosity in our minds instead of thinking of it as a study. This attitude has led to a deeper research, allowing us to dig up more areas that no other scientists have gone before. I think that our scientists have done a good job in quietly and continuously researching new things without people noticing it.

What advice can you give for the success of the Asian Science Camp to be held in Daejeon this year?