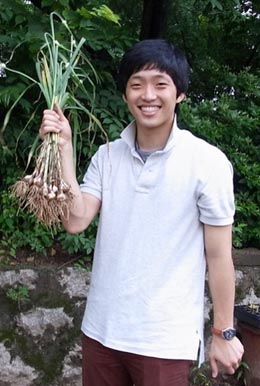 Growing potatoes and lettuce would seem like the last thing on the to-do list of a busy college student in Korea, where the emphasis on good grades and high test scores often eclipses other activities.

But rather than work on building better resumes, a small group of students decided to teach themselves about organic farming techniques. In the process, they not only learned a practical skill but also about how to build community.

The group, Seed Folks, aims to provide university students like themselves with a chance to experience nature by planting and growing vegetables on campus.

“My parents worried about me at first because I seemed to be putting all my energy into farming while my classmates were studying or getting internships,” said Lee Ji-eun, a senior at Ewha Womans University who is part of the group. “But they were happy when I brought them the crops.”

Seed Folks was founded by Korea University senior Gwak Bong-seok and six other students in March 2010. Gwak was inspired by a documentary on organic farming. Membership grew, and the group eventually drew students from universities around the city.

“I was one of the many Seoulites who ate three times a day without knowing where my food came from, but now, farming is a part of my life,” Lee said. “After sowing the seeds, all you need to do is watch the sunlight, rain and earth make the seeds grow. It was a whole new, amazing discovery.”

To generate interest in the group, the students went to Ewha Womans University to hand out cups with vegetable seedlings. Kim Da-young, a junior at Ewha, was a recipient of one of the cups.

“When I first touched the lettuce in the cup, I realized I hadn’t touched earth for so long,” Kim said. “Though my lettuce eventually died, it was nice to be close to a living thing.”

The group offers a workshop called Real Garden School, through which they teach organic farming to students. Each workshop is held once a week, eight times a semester. Thus far, they have held two workshops, with the participation of around 60 students.

“At first, the students frown and do not dare to touch things like earthworms,” said Lee Hye-na, a sophomore at Korea University and a Seed Folks member. “But they gradually start getting used to them.”

Their first garden was in a place where even weeds wouldn’t grow. On the small plot of land next to a basketball court on campus, they tried growing carrots, lettuce, bok choy and cucumbers. They practiced organic farming using natural fertilizers, not pesticides.

“We even made organic fertilizers made from our own urine,” said Lee Ji-eun, the Ewha Womans University senior. “We put it in a 1.5-liter plastic bottle and watered the soil.”

They planted their next garden near the campus gymnasium and diversified their crops by growing cabbage and white radish. But when the price of white radishes skyrocketed last fall, somebody stole every one of the white radishes they had planted.

Theft wasn’t the only obstacle they faced. Mosquitoes attacked in the fields and this summer they’ve had to contend with the rain. Also, since all the members are seniors, it has been difficult for them to spend much time on farming.

Still, the group’s members aspire to learn techniques that will make them better farmers.

“We once went to a workshop at a village in Goesan County, North Chungcheong,” said Lee. “We planted sweet potatoes to help the farmers there. But because we lacked certain skills, I am not sure whether we were helpful or not.”

Now, the students are capable farmers and have come to know the simple pleasure of munching on freshly steamed potatoes after having harvested them on their own.

Farming has also provided them with other opportunities. They also learned how to work as a collective, which has created a strong bond among the group’s members.

“We work together, sometimes filling in for a friend who is sick or vice versa,” Lee said. “We all lead each other since we are a community.”

The second session of Real Garden School, which had 20 students, finished on June 23. Seed Folks will continue farming not only on campus but also at off-campus gardens.

“Campuses have trees and flowers, but all we do is look at them,” said Lee. “I think farming on campus is an awesome opportunity to actually experience nature and form a tight bond with other students since you cannot farm alone.”