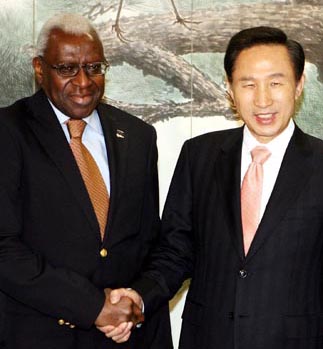 The head of the International Association of Athletics Federations (IAAF) believes that Daegu is ready to welcome the world’s best athletes and will further develop athletics in Asia.

In a recent e-mail interview with the JoongAng Ilbo, IAAF President Lamine Diack, said that Daegu, located about 302 kilometers (187 miles) south of Seoul, is well-prepared to host the 13th IAAF World Championships, which start Aug. 27.

“We can confidently say the facilities are world class and are ready,” Diack said. “Since last December, Daegu Stadium now boasts a bright blue colored track, which is the fastest, most up to date Mondo surface in the world, with new giant screens installed and a new warm-up area close to the venue opening soon.”

Diack added that he wasn’t really concerned about Daegu’s preparedness because the city already showed its ability at the May 2011 Colorful Daegu Pre-Championships Meeting, the official test event of the championships.

“The competition results of the meeting gave us a taste of what we can expect later this year,” the 78-year-old Senegalese Diack said. “The excellent organization confirmed that the city is ready to welcome the world’s best.” 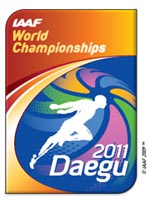 The Daegu Worlds will be the biggest IAAF event in history. So far, 207 countries out of 212 IAAF members have registered a total of at least 2,472 athletes to compete, according to the organizers.

The previous World Championships in Berlin hosted 1,984 athletes from 201 countries.

Diack said the IAAF has put high expectations on past host cities, but believes that Daegu will carve out its own legacy in the process of hosting one of the largest sporting events in the world.

“On the basis of the 12 previous editions of the IAAF World Championships, we can already say that the bar by which we measure success is set at a very high level for all hosts,” Diack said. “It’s an enormous organizational task for any city to manage, but the IAAF is confident that Daegu will live up to the impressive history of these championships.”

Track and field has been unpopular in Korea and there were some worries that the Worlds would not succeed here, but Diack suggested that it will actually be a great opportunity to promote track and field in Asia, adding that he thinks the continent is “the new driving force of the world.”

“That the championships are being held in Korea is by no means a matter of concern,” Diack said. “It’s quite the contrary as it presents the IAAF and the sport of athletics in general with a great opportunity to cross new boundaries and develop our sport further.

“There can also be no better motivation for the youth of Asia than the excitement of seeing first hand the world’s best athletes competing on their continent,” he added.

Japan hosted the event twice - Tokyo in 1991 and Osaka in 2007 - but this will be the first time the event will be hosted on the Asian mainland. Diack suggested that by hosting the event, Daegu will upgrade its image as well as Korea’s reputation as a strong sporting nation.

“The hosting of the IAAF World Championships is a matter of great importance, and gives world stature to any host city and nation.” Diack said. “It is clear that Korea has warmly embraced these championships and so we are more than confident that Daegu can deliver.”

Diack, also a member of the International Olympic Committee, was a long jumper in the late 1950s, winning the French Athletics Championships in 1958. He has been serving as IAAF president since 1999.