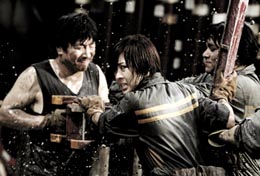 Three-dimensional films have become a dime a dozen in Hollywood, but they are still untapped territory in Korea, which makes the release of “Sector 7” significant in Korean film history. And “Sector 7” is hoping to pave the way for 3-D film market in Korea.

The film depicts the crew of an oil drillship that battles a sea monster that has been transformed by a virus.

“Sector 7” is unique in that it features a female warrior as the lead, which is hard to find in most Korean films. Actress Ha Ji-won, who played a stunt woman in the drama series “Secret Garden” earlier this year, goes further than that in “Sector 7.”

To better express her character, Hae-jun, who spends most of her time at sea, Ha learned to scuba dive and got a motorcycle license.

She also did most action scenes without a stunt double.

A majority of the scenes were shot in a studio in Paju, Gyeonggi, and they were later completed with heavy computer graphics. It took five years including pre-production to complete “Sector 7.”

The actors, who had no previous experience with 3-D films, had trouble finishing each scene. The film also stars established actors Ahn Sung-ki and Oh Ji-ho as members of the drillship crew. 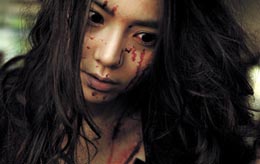 Each summer, Koreans are chilled to the spine by the flood of horror movies that hit the box office. In this year’s lineup, there is “Ghastly.”

It all begins when Ka-hee (Hwang Ji-hyun), an emotionally and psychologically damaged woman, finds a spirit medium to help her address her troubles. Her inability to give birth to a child had long tortured her, and now she will do anything to cheat that fate.

She ends up burying an orphan in a large traditional pot used to burry kimchi underground during the winter and killing him. What she gains for this merciless act is a child of her own. Ka-hee eventually gives birth to a son she names Bin, but Ka-hee soon meets a brutal death.

The film continues as Bin’s aunt Sunny (Han Eun-jung) and her husband Jang-hwan (Park Sung-min) come to live with the now orphaned Bin in his home, which is haunted and where the pot still is. Bin also starts to reveal his violent side.

“Ghastly” is the directorial debut of Ko Suk-jin. The film also features Hyo-min, a member of girl group T-ara, who plays the role of Sunny’s younger sister. 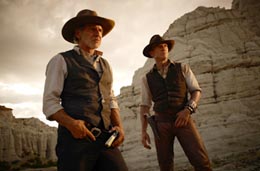 Based on a 2006 graphic novel of the same name by Scott Mitchell Rosenberg, “Cowboys and Aliens,” directed by Jon Favreau (“Iron Man”), takes what most would consider two pretty awesome genres - cowboys and aliens - and meshes them together with some star power as the glue.

An unnamed man played by Daniel Craig (“Casino Royale”) wakes up in the middle of the late 19th century Arizona desert with a metal bracelet around his wrist.

He has no idea who he his or how he got there. When he walks into the nearest town, the sheriff recognizes him as Jake, a wanted outlaw. In his attempt to escape, a woman named Ella Swenson (Olivia Wilde) stops him.

A local influential cattle driver (Harrison Ford) arrives to take Jake and another prisoner off the sheriff’s hands.

And that’s where the two genres start to mix.

During the scuffle, spaceships descend from the sky and start attacking. And the only person able to fend them off is Jake - and his bracelet.

The rest of the movie involves Jake trying to remember his past - the potential key to destroying the attacking aliens.

While the premise sounds exciting, and there are no doubt amazing computer-generated effects, the film has received mixed reviews since its release in the U.S.

“Deep in the Valley” is a raunchy comedy that sees Lester, played by Chris Pratt, and Carl, played by Brendan Hines (perhaps best known as Eli Loker from the TV show “Lie To Me”), take possession of a mysterious video booth that transports the friends to an alternate reality straight out of a pornographic film.

“Deep in the Valley” is the directorial debut of Christian Forte and is a lads’ comedy that will be full of sexual innuendo and cheap jokes, very much in the vein of “American Pie.” The premise couldn’t be simpler: this is a land where every fantasy comes true.

Somewhat predictably one of the men falls in love with one of the women and presumably has a real dilemma towards the end of the film regarding whether he should stay with her and live out his days in a sex-fuelled haze or should he go home without her and regret it forever?

Or perhaps he should try and get the best of both worlds by taking her through the video booth with him back to his rubbish life and risk having her disintegrate as she passes through some kind of inter-dimensional work hole?

Oh, and apparently there is pretty much just the implication of nudity and not much of the real thing. 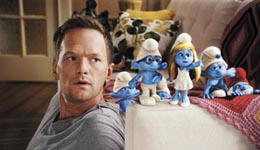 Patrick and Grace Winslow (Neil Patrick Harris and Jayma Mays), a young married couple expecting a child, discover a group of Smurfs in their Manhattan apartment. These blue creatures have been banished from their village after Clumsy Smurf defied the orders of Papa Smurf.

The Smurfs embark on an epic journey through New York City, and later through the Middle Ages, in hopes of stopping arch nemesis Gargamel (Hank Azaria) and his cat Azrael.

This family-friendly film should be a pleasant experience for children and Smurfs fans. Perhaps this latest project can reverse the failures of previous hybrid-animation attempts that flopped in ticket sales.