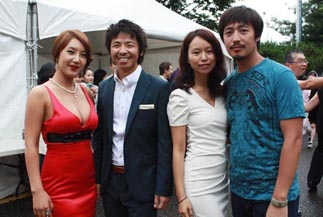 The landscape of the nation’s film industry is starkly polarized, with either star-studded commercial films or low-budget independent films dominating the field. Looking back on the first half of the year, Korean films like “Late Blossom,” “Detective K” and “Sunny” have become huge hits with rising and seasoned actors. But indie films are also making their mark. A string of independent films including “Re-encounter,” “Bleak Night,” “The Journals of Musan” and “Play” have drawn audiences of more than 10,000 each, a figure most indie filmmakers dream about.

Meanwhile, these creative young cineastes have played an important role in diversifying the nation’s film scene. One such group of four filmmakers calling themselves Kino Mangosteen specializes in B movies. The group’s most recent film, the soon-to-be released “Invasion of Alien Bikini,” arrives amidst a resurgence of interest in B movies.

“We are seeing a return of B movies to the nation’s film scene, largely because of developed film equipment and an increasing need for creative movies, and triggered by the recent rise of independent films,” said film critic Jeong Ji-ouk who was present at a press screening of “Invasion of Alien Bikini” in central Seoul on Wednesday. 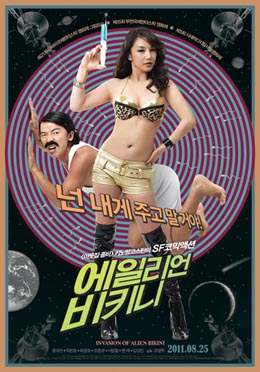 A poster of the Korean B movie “Invasion of Alien Bikini”

“B movies were around until the 70s in Korea but were rare in the late 90s,” Jeong said. “These films used to be considered low culture in the past, but things are changing and people now say that they enjoy watching B movies.

“Young filmmakers are also producing unique B movies, facilitated by easy access to quality cameras. And that will lead to an increase in B movies in the future.”

In addition to “Invasion of Alien Bikini,” a handful of Korean B movies have been released in recent years including “Dachimawa Lee” (2008) and “Save the Green Planet” (2003) and Kino Mangosteen’s previous genre film “The Neighbor Zombie” (2009). 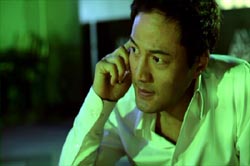 Although it advertises itself as a B movie, “Invasion of Alien Bikini” is actually a mixture of many sub-genres including sci-fi, romance and action.

The film depicts a confrontation between a seductive alien named Monica and a nerd named Young-gun who fancies himself a hero. Monica needs sperm to reproduce but Young-gun wants to keep his virginity until he gets married.

To make a film on such a small budget, the members of Kino Mangosteen - Oh Young-doo, Ryu Hoon, Hong Young-keun and Jang Yun-jung - kept its staff to a minimum.

Oh wrote the screenplay, directed and participated in the editing process. Ryu was in charge of equipment rentals and Hong played the role of Young-gun in the film. Jang, who is Oh’s wife, produced the film and also served as a special effects makeup artist. All four of them have been working in the nation’s film industry over the past 10 years.

“Everyone asks us how it was possible to make a film with such a small amount of money,” Oh told the press at Wednesday’s screening.

“But when you see it you’ll know. Eighty percent of the film was shot in our [Oh and Jang’s] house,” he added with a laugh.

Also present at the Wednesday press event were actors from the film, including actress Ha Eun-jung, who plays Monica, the alien in the bikini. Ha said she was proud to have been a part of the film.

“I think a lot of foreigners have a prejudice against low-budget Korean films. They think low-budget films from Korea are too philosophical or artistic,” said Ha. “But many of them have praised the fresh and creative ideas in the plot.”

Meanwhile, Kino Mangosteen is already working on its next film, “Young-gun in the Time,” which it will make with the 2 million yen (27 million won) prize that it won at the Yubari Fantastic Film Festival.

“Invasion of Alien Bikini” is set for release on August 25. It is rated for viewers over 18 because of some violent scenes.