Will.i.am prince for a day in Korea

Will.i.am prince for a day in Korea 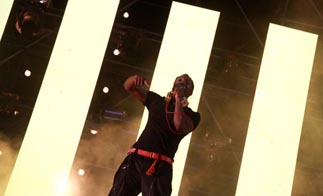 Will.i.am of the Black Eyed Peas performs his first DJ gig in Korea at the Summer Wave Festival on July 23 at the Caribbean Bay water park in Yongin, Gyeonggi. Provided by VU Entertainment

As the crowd, many wearing bikinis and shorts, stamped their feet in an artificial pool and cheered him on, Black Eyed Peas front man will.i.am did not disappoint on his fifth visit to Korea in four years as he belted out BEP hits such as “Boom Boom Pow” and “Check It out” late last month.

The self-confessed K-pop fan kept the masses in good cheer for two hours as he performed his first DJ gig here at the Summer Wave Festival. The pop music festival was inaugurated this year at the Caribbean Bay water park inside Everland Resort, the country’s largest outdoor theme park in Yongin, Gyeonggi on July 23.

With a red pair of branded Beats by Dr. Dre headphones around his neck, the American rapper, songwriter, actor and producer spun the turntable, and occasionally stormed out from behind the DJ box to rap, sing and dance. At times, will.i.am, a.k.a. William James Adams Jr., appeared as pumped full of adrenalin as the onlookers before him, but, unlike them, he was not there just for the music.

“I come to Korea a lot,” the California-born musician said when he sat down with the Korea JoongAng Daily for an interview an hour before his set.

“I come to learn more than I come to work. I am just fascinated by Korean fashion, technology and K-pop. I would always tell people in America, ‘If you want to know what the future looks like, just hop on a plane and go to Seoul.’”

As a fan of Korean culture, he even came up with the idea of inserting Korean letters and phrases into his solo music video, “Check It Out,” last October. 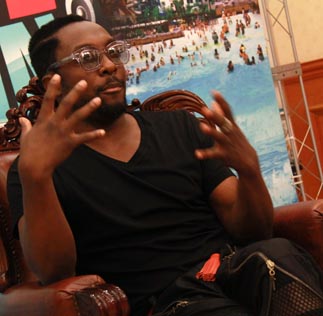 Although Korea last saw the Black Eyed Peas, one of the most commercially successful pop bands in the United States, take the stage here in August 2007, will.i.am is becoming something of a regular. Such is his enthusiasm to include the country in his packed itinerary that he flew in despite only having a few hours to spare.

Right after his late-night appearance, the multiplatinum artist left for Los Angeles on a 1 a.m. flight., less than 24 hours after his arrival. This means he flew all the way to Asia for a single two-hour set - a choice that few other globally recognized musicians would be prepared to make.

Having previously worked with Michael Jackson, Usher, U2, Justin Timberlake and, most recently, Britney Spears, the performer added another name to the list in May, when he stayed in Seoul for three days to work on an album project with 2NE1, currently the most popular Korean girl group from YG Entertainment.

The two-year-old band, which is already popular in Japan and is gaining recognition in the United States and Europe, has been preparing to make its first foray into Western countries, with the dates yet to be decided.

Will.i.am, who has been working on the group’s debut U.S. album in London and Los Angeles since last year, says he is done recording “five really good songs,” and wants to add a couple more.

When asked why people around the world are increasingly gravitating to K-pop, he pinpointed its “excitement” factor as the driving force.

“As a whole, America’s culture of music isn’t exciting. You don’t have that movement of excitement,” he said. “And K-pop, it’s like the whole country is excited about music. It’s not just one or two artists.”

In January, the musician added one more occupation to his flourishing career, which began in 1993. He joined Intel as its director of creative innovation on a multiyear contract. As a tech fan, he is responsible for collaborating with the world’s largest computer chip manufacturer on various creative and technological endeavors for devices such as laptops, smart phones and tablets, according to Intel.

He described his new part-time job as “equal to or funner than music.”

“I was supposed to work a certain amount of days [but] I can’t wait to work even more ... because you build and collaborate with people that bring the future closer to us,” he said. “It’s everything that I’ve dreamt of. So I consult on my perspective on the interaction of technology and entertainment - creation, curation, distribution, sharing devices. We are also moving forward on developing hardware.”

He has already laid out a plan for a third visit to Korea this year. “I will probably come back in December, since I have meetings in China and Japan. I am a meeting man,” he said, adding that he may consider deejaying at a club in Seoul next time.

As he concluded the interview, even the quick list he compiled of the cities he will visit next sounded like an effortless rap. “From here to LA, LA to D.C, to Philly, to New York, to Vegas, to France. On [Aug.] fifth, I’ll be home.”