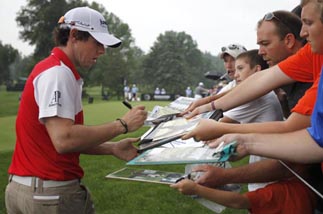 Northern Ireland’s Rory McIlroy, left, signs autographs for fans on his way to the third tee during practice for the Bridgestone Invitational golf tournament at Firestone Country Club, in Akron, Ohio, Wednesday. [AP/YONHAP]

The 22-year-old from Northern Ireland spoke to PGA Tour officials Wednesday morning and said he would start looking for a place to live in Florida - either Orlando or the West Palm Beach area - after the PGA Championship next week.

“I feel I play my best golf over here,’’ McIlroy said. “I’m very comfortable in this country. Yeah, I’m definitely looking toward coming back and playing a full schedule.’’

Taking up his tour card next season would mean playing at least 15 events on the PGA Tour in 2012.

McIlroy, one of the brightest young stars in golf, gave up his PGA Tour membership after 2010, saying he wasn’t interested in the travel involved to play on the PGA and European tours, and that the FedEx Cup playoffs - a big incentive to join the PGA Tour - was too much golf at the end of the summer.

He has three career wins, the biggest two in the U.S. - a 62 in the final round at Quail Hollow in 2010, and his record-setting performance in soft conditions at Congressional to win the U.S. Open by eight shots at 16-under 268.

McIlroy struggled in wind at the British Open, however, and said after his final round that he doesn’t enjoy playing in such conditions. “I’d rather play when it’s 80 degrees and sunny and not much wind,’’ he said at Royal St. George’s.

Asked what changed his mind about PGA Tour membership, McIlroy said it was the British Open.

The reaction to his comments?

“No, the weather,’’ he said to laughter. “I just thought about it. I feel as if my game really suits playing courses over here. You have your favorite events, and most of my favorite events seem to be on this side of the pond. And my game suits it over here. I’m very comfortable over here.”

Because he gave up his membership last year, McIlroy was only allowed to play 10 times on the PGA Tour this year, including the four majors and the three World Golf Championships. The tour later allowed him and Lee Westwood to add another tournament, provided it was the Players Championship. Both declined to play at TPC Sawgrass last year.

Andy Pazder, the tour’s chief of operations, said McIlroy spoke to tour officials without giving them a final decision. McIlroy has until Nov. 22 - or 30 days after the PGA Tour season ends - to apply.

“He certainly gave a strong indication,’’ said Pazder, who listened to McIlroy’s press conference. “He has plenty of time to make a final decision, and if it works out that he’s rejoining the PGA Tour, obviously we’re ecstatic about that. An immense talent and a personable young man, he’d be an asset for us, no question.’’

If he joins, it means McIlroy would play five more regular PGA Tour events than he did this year when he competed at the Honda Classic, Wells Fargo Championship and the Memorial.

He might be able to knock out four of those through the playoffs if he plays to the level expected of him, along with the Players Championship.

“The only thing about the FedEx was that you only got a week off after the PGA and then straight back into four weeks out of five that were pretty tough,’’ he said. “It’s hard to keep it going for that length of time. It’s something that you just have to accept.’’