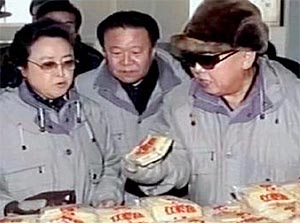 Kim Jong-il’s younger sister, Kyong-hui, has not been seen for two months in the North Korean media, and a spotting in June may explain her disappearance.

A South Korean government source familiar with the inner workings of North Korea said yesterday that the 65-year-old Kim Kyong-hui had been seen by South Korean tourists at an airport in Moscow.

“Kim has been suffering from back complications from the past, and it seems she received treatment [in Russia],” the source said. “She was surrounded by North Korean bodyguards at the time. Her back was crooked, like she was in pain, and she had trouble walking.”

Despite her medical problems, the “Dear Leader’s” younger sister apparently spent time shopping for luxury goods in Russia before heading back to the North in August.

Before her abrupt disappearance from the media, Kim Kyong-hui was frequently publicized on Kim Jong-il’s “field guidance trips” with her husband Jang Song-thaek, considered the second-most powerful man in North Korea. The last report on Kim Kyong-hui from the North was on June 5.

Kim Kyong-hui’s recent rise to prominence came after Kim Jong-il suffered a stroke in 2008. Changes were made in the North Korean leader’s entourage shortly after, and the status of both Kim Kyong-hui and her husband was elevated.

When she was given four-star general status with her nephew and Kim Jong-il’s heir apparent, Jong-un, last September, analysts and South Korean government officials agreed that Kim Jong-il was making preparations for his youngest son’s ascension, surrounding him with trusted family members in high positions.

Prior to coming into the spotlight in the past few years, Kyong-hui was widely known to have suffered from severe alcohol addiction and depression.