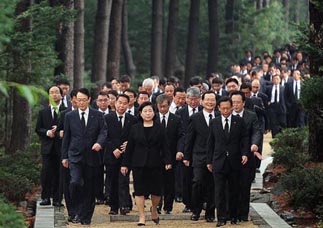 Hyundai Group Chairwoman Hyun Jung-eun and other executives leave the family cemetery in Hanam, Gyeonggi, after a ceremony to commemorate the eighth anniversary of the death of Chung Mong-hun, former chairman of the Hyundai Group and husband of Hyun. [NEWSIS]

North Korea has selected a U.S. company to do business with at its Mount Kumgang tourist resort to replace, at least partially, Hyundai Asan, which has a legal monopoly on the business.

The decision was made last month, according to Korea Pyongyang Trading U.S.A., a trading company based in New York State.

The company is run by Steve Park, or Park Il-woo, who said his company had signed a memorandum of understanding with North Korean officials on July 25.

“It’s a plan that has been long in the making,” said Park. “Last week an employee of mine at our Pyongyang office received my orders and signed the MOU with North Korean officials.”

Park’s company previously sold North Korean beer and soju in the U.S. but the business suffered from a ban on North Korean imports and lackluster demand.

The businessman, who said he was planning to visit North Korea in the next few days, said he had no comment on the impasse between the two Koreas on the mountain resort.

Hyundai Asan said yesterday it remains hopeful the company will be involved in cross-border tourism in the near future.

The company’s president Chang Kyung-chak left for Mount Kumgang yesterday to commemorate the eighth anniversary of the death of former Hyundai Group chairman Chung Mong-hun, who was the guiding force behind the project in North Korea. Chang told reporters he would not be having talks with North Korean officials over the dispute.

Hyundai Group chairwoman Hyun Jeong-eun, who attended a memorial ceremony in Hanam, Gyeonggi, yesterday, said the company was still interested in doing business at the resort. When asked by reporters what she thought of the U.S. company doing business with North Korea, she said she was unaware of the situation.

North Korea said on July 29 that South Korea had “three more weeks” to remove its assets from the resort.

Inter-Korean relations seemed to be thawing earlier this week. The South Korean Red Cross offered 5 billion won worth of aid, including medicine and daily necessities, to rain victims in North Korea Wednesday.

North Korea sent a reply yesterday, asking for food and cement from the South’s Red Cross. The Red Cross replied saying it would only send the items mentioned before. The South Korean Red Cross said in a statement it “hoped for negotiations to end soon.”