No thrills at start of America’s Cup World Series

No thrills at start of America’s Cup World Series 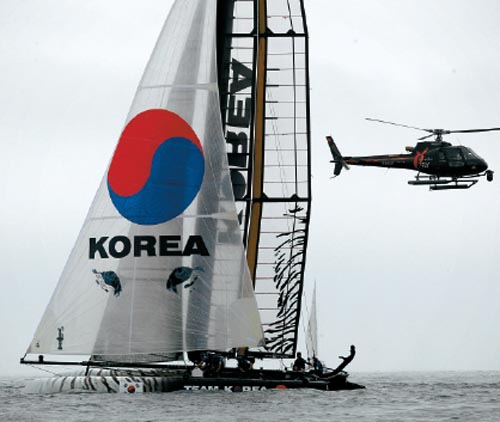 Team Korea AC45, skippered by Chris Draper of Britain, sails during the first day of racing at the America’s Cup World Series on Saturday in Cascais, Portugal. [AP/YONHAP]

CASCAIS, Portugal - Light wind hampered the start of the America’s Cup World Series on Saturday as poor conditions provided the high-tech catamarans with a sputtering start.

Weather conditions on the Atlantic waters off the coast of Portugal initially delayed sailing before organizers decided to abandon the inaugural speed trial event and stick to fleet races as the nine-day series got under way.

“Today was a bit of a disappointment in terms of sailing,’’ Emirates New Zealand skipper Dean Barker said of the launch of the 34th edition of the series. “It’s not exactly on the edge.’’

Wind has often hampered America’s Cup racing in the past but the new class of boats still got going in light wind, although their top speeds of 13 knots (15 mph) were less than half of what they were capable of.

Artemis Racing of Sweden won the opener while James Spithill’s Oracle Racing No. 4 yacht took the next two races after being disqualified from the opener for failing to perform a penalty.

“There are worse things than not to have enough wind,’’ said French skipper Loick Peyron, who guided his Energy Team boat to seventh place out of the nine teams from six different countries. “It’s true it wasn’t dazzling, and maybe not at the top of what it should be, but today was the worst we’ll see and that’s in these conditions. Imagine how it will be when it’s good.’’

Oracle Racing’s victory over Alinghi in a one-off 33rd edition last year led to the introduction of the 44-foot long carbon-fibre hulls that stand 71 feet high and normally cut through the waters with precision and stealth.

While Saturday’s opener may have lacked spark, for most teams it was just the start of a long road to 2013 and the America’s Cup finale when one challenger will come through to face Oracle Racing for the Auld Mug.

The series, which will also go to the United Kingdom and San Diego later this year, will eventually jump from the AC45 class to the AC72. This not only stretches the boats to 85 feet but puts them at the forefront of technology as they can reach up to three times the wind speed.

The World Series events are important for many syndicates’ long-term vision of financing that jump.

“Yes the playing field is level here with these boats, for sure, but when we move to the 72s that’s when the Cup will be better available to the bigger fish,’’ Green Comm Racing team manager Luca Devoti said.

Oracle Racing No. 5 boat skipper Russell Coutts said the one-design boats allowed teams to get a handle on the technology, insisting the playing field was level. “Money helps, but if you look back you see the biggest budgets haven’t always won the America’s Cup,” he said. AP