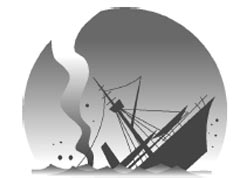 On the morning of Sept. 17, 1894, at the height of the First Sino-Japanese War, the Japanese and Chinese navies fought in what became known as the Battle of the Yalu River at the border between Korea and China. It was a defining moment in the Sino-Japanese War. The battle started when the Beiyang Fleet of the Qing Dynasty was attacked by Japanese battleships.

The Beiyang Fleet was the most powerful of four modern fleets that China built to rid itself of its disgrace in the Second Opium War (1856?1860). The fleet was comprised of 55 vessels, including eight cruisers, with a total loading capacity of 50,000 tons. The Dingyuan and Zhenyuan were twin flagships from Germany. They were fully loaded and equipped with 12-foot guns and boasted the highest naval technologies of the time. The Chinese were proud to have the most formidable naval force in East Asia.

In battle, however, the Beiyang Fleet was completely crushed. As soon as the Yalu Battle broke out, the guns on the Zhenyuan exploded when they were fired at the Japanese ships and were instantly out of commission. The ship’s admiral, Ding Ruchang, was injured and the entire fleet collapsed at once. The battle ended in China’s defeat with the loss of five warships and 850 soldiers.

Historians say that the outcome was predetermined. Unlike its fancy ships, the members of the Beiyang Fleet lacked the proper training. According to historian Shinji Kojima’s “Modern History of China,” the Beiyang Fleet was 1 nautical mile slower than the Japanese fleet on average, the vessels were two years older and the guns required four times longer time to fire.

Gathering momentum from the victory, Japan blockaded Weihaiwei, the home port of the Beiyang Fleet, on Feb. 17, 1895. Dingyuan was hit by a Japanese torpedo and sank, and Zhenyuan was captured by the Japanese and incorporated into the Japanese Navy. The defeat confirmed that China’s dream to advance to the ocean was in vain. For the over 100 years since, China has not achieved notable naval capacity.

China has finally completed the reconstruction of the Soviet aircraft carrier Varyag, which was purchased from Ukraine in 1998. The newly refurbished 60,000-ton carrier is set to launch this month. While the Varyag has not yet been given a new name, there is a report that Tianjin - the city where the Beiyang Fleet was organized - is a likely candidate. We need to think about China’s intentions, as it seems to be reviving its dream of the Beiyang Fleet.