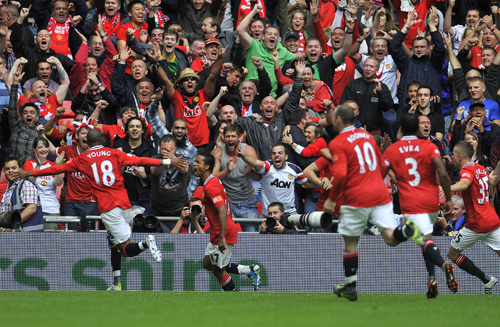 LONDON - Sir Alex Ferguson believes Manchester United’s dramatic comeback against Manchester City in the Community Shield proves he was right to put his faith in the club’s young players.

Ferguson’s side came from two goals down to beat their crosstown rivals 3-2 in injury time at Wembley Stadium on Sunday despite fielding a second-half line-up with an average age of just 22.

Smalling started the comeback with a close-range volley and Nani equalized by capping a sublime move, involving Cleverley and Wayne Rooney, with a cool finish.

United got their reward for a vibrant display when Nani grabbed the winner with virtually the last kick of the match after a mistake from City defender Vincent Kompany.

It was the perfect morale boost seven days before United kick off their Premier League title defence at West Bromwich Albion, and the gaffer was delighted to see so many young prodigies leading the way.

“For us it just confirms what I thought about the squad. People were saying it’s not the best United squad, but you have to remember a lot of young players will improve,” Ferguson said.

“I always wanted to expose Jones, Cleverley and Evans to that big-match environment. It was a big challenge for them and they did well.

“I’m very confident with this group of players. De Gea and Jones give us a good future. They are outstanding.

“[Ashley] Young was good as well. He is 25 and a mature player after playing for Aston Villa, but he’s new to the type of challenge he is getting at United.”

Ferguson believes Cleverley has benefitted from a loan spell at Wigan last season and the diminutive England Under-21 midfielder showed glimpses of a talent that reminded some of the recently retired Paul Scholes.

Welbeck, who picked up an ankle knock that may stop him playing for England in midweek, looks a more dynamic force since his loan spell at Sunderland last season and he linked up well with United wingers Nani and Ashley Young.

“We toyed with the idea of starting Cleverley but I thought Michael Carrick’s experience was better suited to the game,” Ferguson said. “Cleverley can get forward from midfield though and we probably needed that type of player.”

Although Ferguson’s gleeful celebration of Nani’s winner underlined his delight at beating City in the annual curtain-raiser to the English season, he knows Roberto Mancini’s men will be among several strong challengers for the title.

“I trust my players and have confidence in their ability, but you can never be confident of success in the Premier League,” he said.

“Six teams could be challenging for the title.”

Meanwhile, British tabloids speculated recently that the American Glazer family are planning to sell a 25-percent stake in the club in order to clear some of their debt.